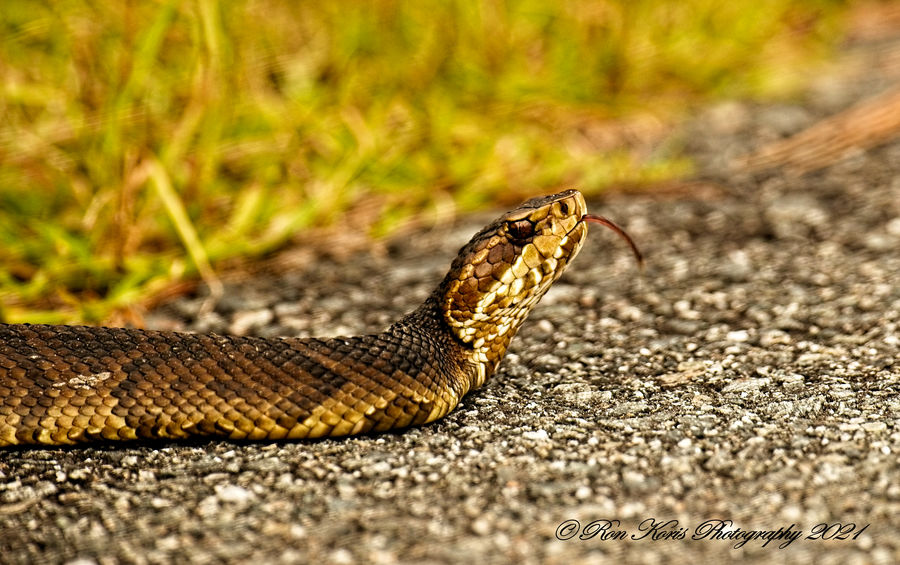 Xmsmn Loc: Minnesota
Hope this was taken with a superzoom with a remote trigger!
Awesome shot, thanks for sharing.
Mark

That's quite a shot, Ron. I assume you were a considerable distance from the cottonmouth.

kpmac Loc: Ragley, La
I would have killed it. I hate snakes. Kudos to you for the shot, though.

BudsOwl Loc: Upstate NY and New England
kpmac wrote:
I would have killed it. I hate snakes. Kudos to you for the shot, though.

gsmith051 Loc: Fairfield Glade, TN
Not too close but close enough! You must of been far enough away because snake doesn’t seem too concerned. Really nice shot. Dogs eye view really worked well.

Curmudgeon Loc: SE Arizona
Great shot from a cool perspective. If I'd gotten down there I would have never got up again.

Great image!!!! Ron
I notice you left it a way to getaway from you.

Reply
Sep 14, 2021 09:35:58   #
olemikey Loc: 6 mile creek, Spacecoast Florida
Neat shot!! Some snake thoughts - For all the "snake killers", every time you see a snake with a lump anywhere in it, the lump is almost always a rat/mouse (especially in drier areas), they help the hawks and owls to keep vermin under control. Folks in my area continue to kill the Florida Brown Watersnake (which is a fantastic pest controller) because they don't take the time to actually see it for the harmless snake it is, but has the great misfortune of a very mild resemblance to it's poison cousins. In the south, most of the "dangerous snakes" seen/reported in the watery/swampy/wooded areas and streams/water holes/ponds/lakes/swimming areas are actually non-poisonous water snakes. Most poisonous snakes are not interested in you, they go the other way. Now, if you step on a poisonous one, all bets are off.

For Floridians - I'm not talikng about pythons/annacondas, kill those, every one you see.

RoswellNM Loc: SW Indiana
Great shot. Thanks
Amen to olemikey’s comments. Leave snakes alone. They are an essential part of the system (and they’ve been doing their thing a lot longer than we’ve been around).

Reply
Page 1 of 3 next> last>>
If you want to reply, then register here. Registration is free and your account is created instantly, so you can post right away.
Photo Gallery
Home | Latest Digest | Back to Top | All Sections
Contact us | Privacy policy | Terms of use | DMCA
UglyHedgehog.com - Forum
Copyright 2011-2021 Ugly Hedgehog, Inc.