weberwest Loc: Ferndale WA
North of the Hala Targowa Market Hall stands the Great Mill, adjacent to which stands in a park next to the Old Town Hall a monument to the astronomer Jan Hevelius.

GREAT MILL - History: The Great Mill was built by the Teutonic Knights in 1350 on the artificial island of the Radunia canal, near a tannery, fulling mill, copper smithy, sawmill, oil mill, grinders and several other grain mills. The first record of it appeared in 1365. The building burned down in 1391, but was soon rebuilt. In 1454, the Great Mill was captured by the inhabitants of Gdansk, belonging to the anti-Teutonic conspiracy, which initiated the uprising against the supremacy of the Teutonic Order. After the Thirteen Years War, which was victorious for Poland, the king handed over the mill to the inhabitants of Gdansk. Until 1939, it remained in use and produced up to 200 tons of flour per day. During the Second World War it was partially destroyed. In 2016, it was donated to the needs of the Amber Museum.
Architecture: The Great Mill was one of the largest medieval grain mills in Europe. It was 26 meters high and 41 meters long. Situated on an island created for this purpose on the Radunia canal, it was surrounded on both sides by water, which allowed to double the number of mill wheels, and thus increase efficiency. It had 18 bucket wheels with a diameter of 5 meters. These wheels were on the two lower floors, six of the upper floors were intended for a warehouse. In the annex to the east, you could bake bread, then sell it, among others, on the Bread Bridge at the Old Town Hall. Around the Great Mill there were many other buildings, such as stables, bread stalls and the mill manager’s house.

OLD TOWN HALL - This building was erected in years 1587-1595, following the demolition of the earlier Gothic edifice. The design is attributed to Anton van Obberghen, a distinguished architect from the Netherlands and the most eminent representative of the Renaissance movement in Gdansk. The history of the building is also intertwined with that of another famous figure, namely that of Johannes Hevelius, who was a member of the Old Town council. After 1793, the building ceased to perform its original function, with its interiors adapted as a court of law in years 1803-06. In years 1911-14 the interiors were modified, with the Great Hall being restored to its former size and the Renaissance ceilings were restored. During World War II, the basement vaulting was reinforced in order to make it possible to use the basements as an air raid shelter. The building suffered only slight damage in 1945.

JAN HEVELIUS - (1611-1687) His first name is variously spelled as Jan, Johann or Johannes and his last name as Hevelius, Heweliusz, Hewel, Hevel or Howelcke. Jan was a councillor and mayor of Gdansk. As an astronomer, he gained a reputation as "the founder of lunar topography", and described ten new constellations, seven of which are still used by astronomers. His parents were wealthy brewing merchants of Bohemian origin. In 1630 Hevelius studied jurisprudence at Leiden, then traveled in England and France. In 1634 he settled in his native town. The following year, Hevelius became a member of the beer-brewing guild, which he led from 1643 onwards. Throughout his life, Hevelius took a leading part in municipal administration, becoming town councilor in 1651; but from 1639 on, his chief interest was astronomy. In 1641 he built an observatory on the roofs of his three connected houses, equipping it with splendid instruments, ultimately including a large Keplerian telescope of 46 m (150 ft) focal length, with a wood and wire tube he constructed himself. This may have been the longest "tubed" telescope before the advent of the tubeless aerial telescope.
In May 1679 the young Englishman Edmond Halley visited him as emissary of the Royal Society, whose fellow Hevelius had been since 1664, to persuade Hevelius to use telescopes for his measurements, yet Hevelius demonstrated that he could do well with only quadrant and alidade. He is thus considered the last astronomer to do major work without the use of a telescope. Hevelius made observations of sunspots, devoted four years to charting the lunar surface, discovered the Moon's libration in longitude, and published his results in Selenographia, sive Lunae descriptio (1647), a work which entitles him to be called "the founder of lunar topography". He discovered four comets, in 1652, 1661 (probably Ikeya-Zhang), 1672 and 1677. These discoveries led to his thesis that such bodies revolve around the Sun in parabolic paths. His observatory, instruments and books were destroyed by fire in 1679. His health had suffered from the shock of the 1679 fire and he died on his 76th birthday, 28 January 1687. Hevelius is buried in St. Catherine's Church in his hometown.


Notes
TRIP INFO: Set # 1 provides a brief introduction, maps and information for the entire series. Find it at:
https://www.uglyhedgehog.com/t-693834-1.html

EARLIER POSTS of this series: Access my topic list, the new posts are listed in reverse chronological order:
https://www.uglyhedgehog.com/user-topic-list?usernum=45105

Thank you for visiting, I recommend viewing the downloads and look forward to your comments and questions.

.
1 - Wielki Mlyn/The Great Mill, built by the Teutonic Knights in 1350 on an artificial island, driven by 18 water wheels with a diameter of 5 m 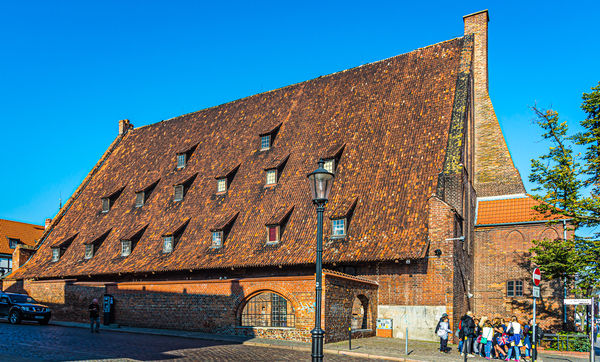 (Download)
2 - Radunia Canal, built in 14c by the Teutonic Knights to provide water and power to the Great Mill, at rear the tower of St Catherine's church 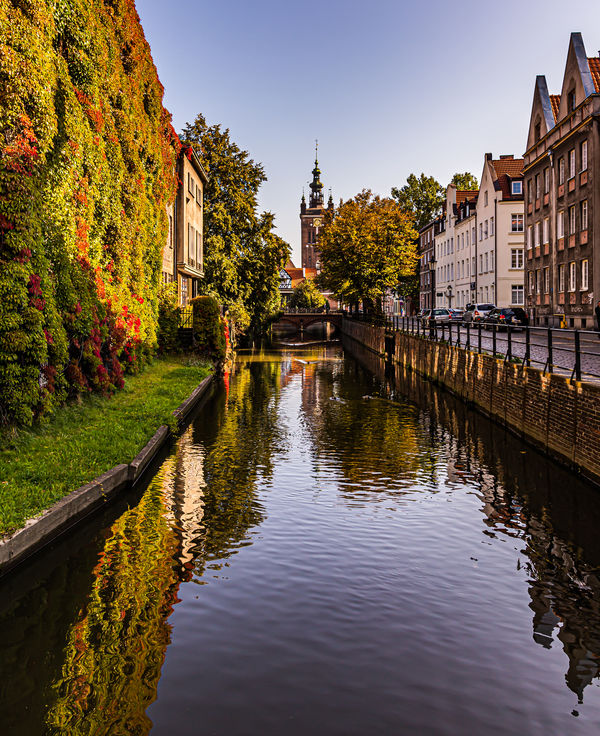 (Download)
3 - Reflections in the Radunia Canal, with a duck "laying down" his personal color channel 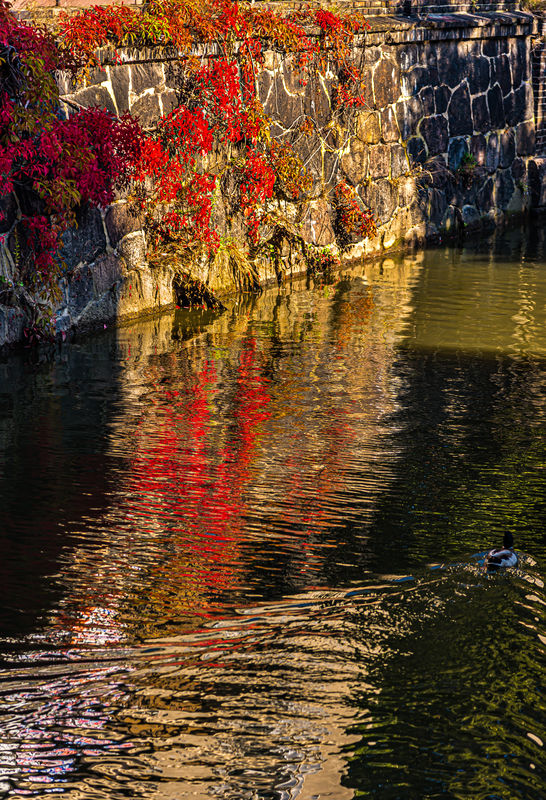 (Download)
4 - Restaurant at the western tip of the Mill Island in the Radunia Canal, at rear the tower of St Catherine's church 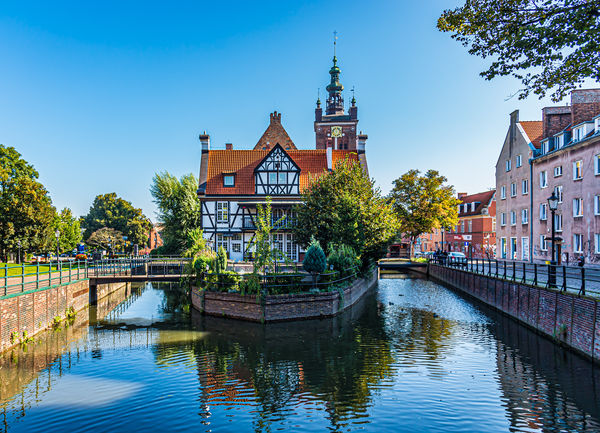 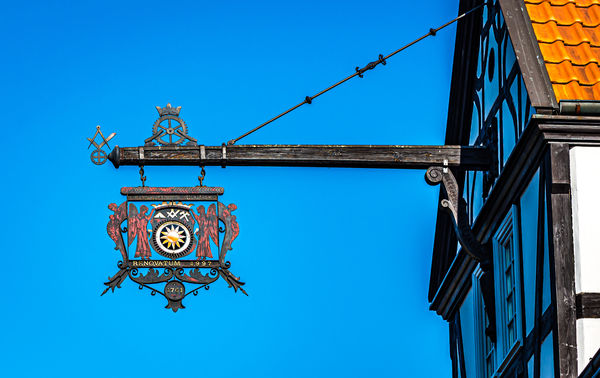 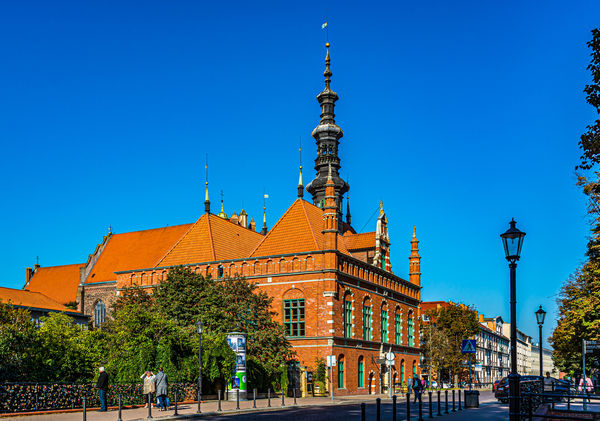 (Download)
7 - View from the Hevelius Park: Sculpture of astronomer Jan Hevelius, the Old Town Hall at rear and part of the stellar map at right 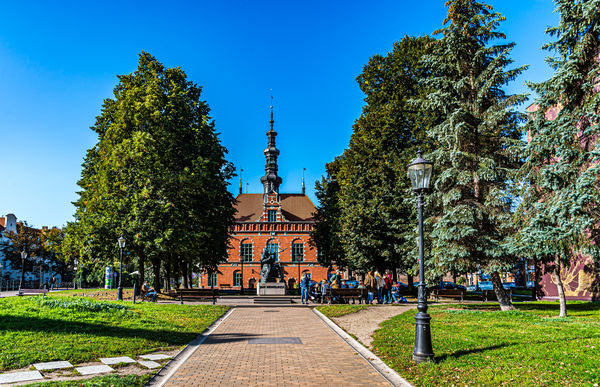 (Download)
8 - Old Town Hall, 16th century Renaissance building: Full frontal view (this is my first-ever attempt at merging two photos, the building is of course not curved but this is the best I could achieve without losing too much of the sides) 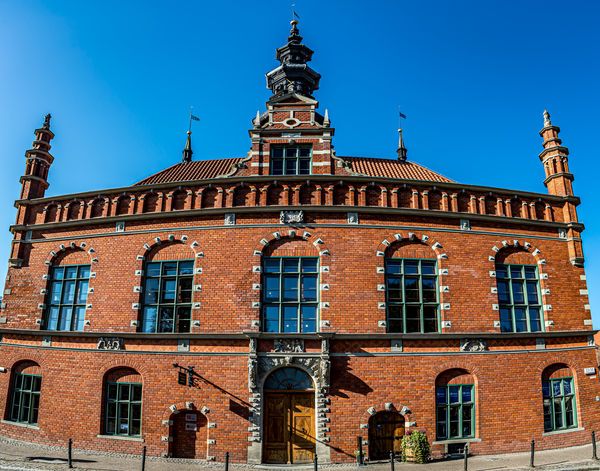 (Download)
9 - Upper part of the monument to Jan Hevelius, depicting him as an astronomer using a quadrant 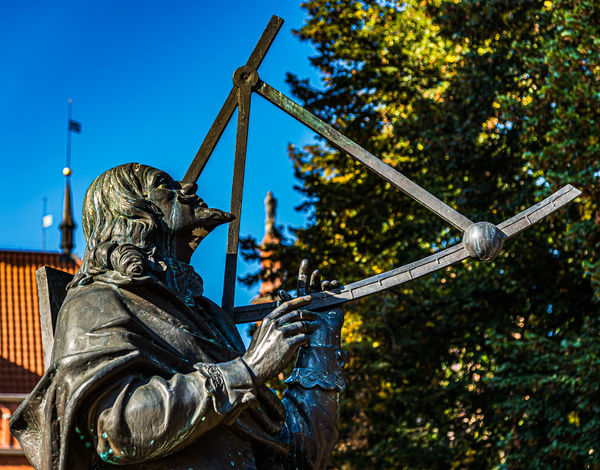 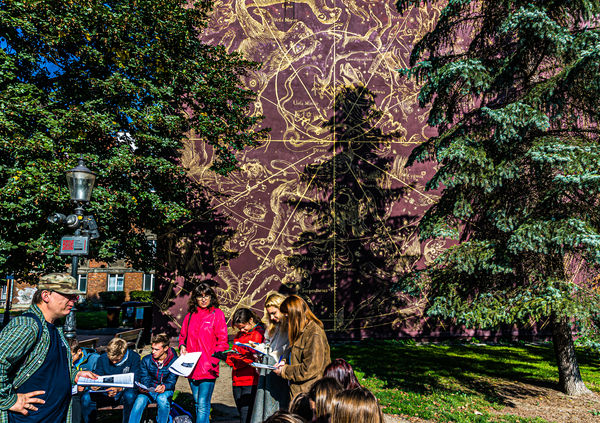 weberwest Loc: Ferndale WA
City map of the center of Gdansk/Danzig for your reference 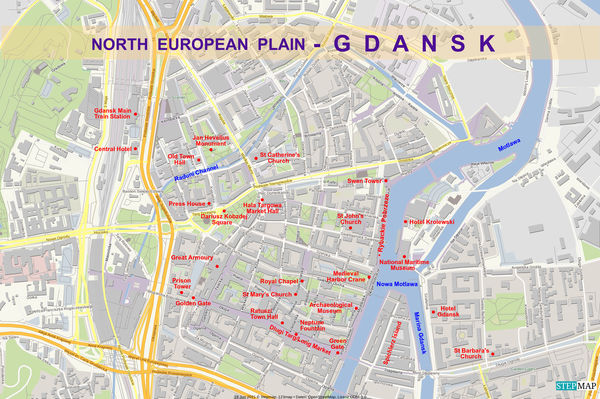 (I found it on Google Maps and perused the area.

Thank you very much MSW for looking in on my ongoing tour and your kind words, glad to hear that you enjoyed the set.

(I found it on Google Maps and perused the area.

Thank you very much Bill - way to go! I am very happy to hear that you made the effort and found the place on Google Maps, that is one of the platforms I work with daily when recreating my albums, most of the time years after I took the shots. It really helps to understand the distances and layouts - and the maps also show, particularly here in Gdansk, how much more there would be to visit in this city.

Thank you Scotty for looking in on my long-running travelogue, I am happy to hear that you enjoyed the set. I believe this is the first time I see you visiting one of my tours, welcome aboard, though this tour is nearing its completion, I hope you will look in again and enjoy the final moments, or maybe go back and see some of the earlier episodes - welcome again! - Joe

Longshadow Loc: Audubon, PA, United States
NMGal wrote:
Most interesting set, Joe. Is that the Freemason symbol in number 5, at the end of the pole?
That's what I was wondering also.

weberwest Loc: Ferndale WA
NMGal wrote:
Most interesting set, Joe. Is that the Freemason symbol in number 5, at the end of the pole?

Thanks Barbara - as to your question: I haven't the faintest idea, don't know anything about Freemasons, just googled the subject and looked at the images, certainly seems to have some resemblance, but whether this is intentional or coincidental, I could not say.

Hi Bill, see my answer to Barbara above, I have no idea, just liked the sign, but was concentrating rather on the "image" than on the symbolics - maybe someone else on the forum here has a good idea or input?

Thank you Mike - of course these would be your favs: where there is water, there is Mike, isn't that a common saying?

UTMike Loc: South Jordan, UT
weberwest wrote:
Thank you Mike - of course these would be your favs: where there is water, there is Mike, isn't that a common saying?

If not, it should be.

Reply
Page 1 of 4 next> last>>
If you want to reply, then register here. Registration is free and your account is created instantly, so you can post right away.
Photo Gallery
Home | Latest Digest | Back to Top | All Sections
Contact us | Privacy policy | Terms of use | DMCA
UglyHedgehog.com - Forum
Copyright 2011-2021 Ugly Hedgehog, Inc.