weberwest Loc: Ferndale WA
After having started our drive in the Northern Netherlands and cruised through pretty much the widest sector of Germany from west to east, we are poised to cross the border again and start our visit to our third and final country: The Republic of Poland. In many ways, Poland's western area closely resembles Germany and in fact all the cities we are going to visit here were at one time or another heavily populated by people of German ethnicity which substantially influenced the commerce and trade in the past and which is reflected in the building styles. As it is somewhat difficult for our English tongues to pronounce, or even read the spelling of the cities in the Polish language, I will indicate the easier to manage German/anglicized version of the towns names as well. We visited a total of 5 Polish cities, all located in the western part of Poland, before heading back to our base in Switzerland. I will present these cities not exactly in the order we drove them, leaving Poland's spectacular seaport GDANSK/DANZIG as my final presentation.

First my customary brief introduction to the country POLAND, gleaned as usual from the extensive writings in Wikipedia, augmented by further information and substantially condensed by me. The scope of this introduction is very basic and limited and I encourage interested readers to read up more either online or possibly have a go at James Michener's excellent novel "Poland" which was very well researched and brings the changing history of Poland very much to life.

INTRODUCTION
Poland lies at the physical center of the European continent, approximately between latitudes 49° and 55° N and longitudes 14° and 24° E. Irregularly circular in shape, it is bordered to the north by the Baltic Sea, to the northeast by Russia and Lithuania, and to the east by Belarus and Ukraine. To the south the border follows the watershed of the Beskid, Carpathian and Sudeten mountains, which separate Poland from Slovakia and the Czech Republic, while to the west the Neisse and Oder rivers define the border with Germany. Its current frontiers, stretching for 2,200 miles (3,500 km), were drawn in 1945. Except for its southern mountainous regions, the country consists almost entirely of lowlands within the North European Plain.
With a population of nearly 38.5 million people, Poland is the fifth most populous member state of the European Union. Poland's capital and largest metropolis is Warsaw. Other major cities include Krakow, Lodz, Wrocław, Poznan, Gdansk, and Szczecin. The origin of the name "Poland" derives from the West Slavic tribe of Polans (Polanie), who inhabited the Warta river basin of the present-day Greater Poland region (with Poznan as capital) starting in the mid-6th century. The origin of the name Polanie itself derives from the Proto-Slavic word pole (field).

HISTORY
The history of human activity on Polish soil spans thousands of years. Throughout the late antiquity period it became extensively diverse, with various cultures and tribes settling on the vast Central European Plain. However, it was the Western Polans who dominated the region. The establishment of Polish statehood can be traced to 966, when the pagan ruler of a realm coextensive with the territory of present-day Poland embraced Christianity and converted to Catholicism. The Kingdom of Poland was founded in 1025, and in 1569 it cemented its longstanding political association with its northeastern neighbor Lithuania by signing the Union of Lublin. This union formed the Polish–Lithuanian Commonwealth, one of the largest (over 1,000,000 km² – 400,000 sq mi) and most populous nations of 16th and 17th century Europe, with a uniquely liberal political system which adopted Europe's first modern constitution, the Constitution of 1791.
With the passing of prominence and prosperity, the country was partitioned by neighbouring states at the end of the 18th century, and regained independence in 1918 with the Treaty of Versailles. After a series of territorial conflicts, the new multi-ethnic Poland restored its position as a key player in European politics. In September 1939, World War II began with the invasion of Poland by Germany, followed by the Soviets invading Poland in accordance with the Molotov–Ribbentrop Pact. Approximately six million Polish citizens, including three million of the country's Jews, perished during the course of the war. As a member of the Eastern Bloc, the Polish People's Republic was a chief signatory of the Warsaw Treaty amidst global Cold War tensions. In the wake of the 1989 events, notably through the emergence and contributions of the Solidarity trade union movement, the communist government was dissolved and Poland re-established itself as a semi-presidential democratic republic.
Poland is a developed market and a regional power in Central Europe; it has the sixth largest economy in the European Union by nominal GDP. It provides very high standards of living, safety and economic freedom, as well as free university education and a universal health care system. The country has 16 UNESCO World Heritage Sites, 15 of which are cultural. Poland is a member state of the Schengen Area, European Union, European Economic Area, the United Nations, NATO, the OECD.

Our visit to Poland begins with the city of SZCZECIN/STETTIN. We only had one afternoon to view the city's sights, but I have to say that this city wins the gold medal for being extremely well organized for tourists: We received in our hotel a map of the city, which included a suggested walking tour. Each site is marked with a number on the map, and that number was also marked on the pavement in front of the site and the way to proceed to the next site was marked in red on the pavement as well. My wife and I have visited thousands of cities and towns in way over 100 countries on this planet, and we have never seen such an efficient organization. Below a few words of introduction to this city:

OVERVIEW - Szczecin, often anglicized to Stettin, is the capital and largest city of the West Pomeranian region in northwestern Poland. Located near the Baltic Sea and the German border, it is a major seaport and Poland's seventh-largest city. As of December 2019, the population exceeded 400,000. The city is located on the river Oder, south of the Bay of Pomerania. It is the urban center of the Szczecin agglomeration, an extended metropolitan area that includes communities in the German states of Brandenburg and Mecklenburg-Vorpommern. The city's recorded history began in the 8th century as a Pomeranian stronghold, built at the site of the Ducal castle. In the 12th century, when Szczecin had become one of Pomerania's main urban centers, it lost its independence to Piast Poland, the Duchy of Saxony, the Holy Roman Empire and Denmark. At the same time, the House of Griffins established themselves as local rulers and the population was Christianized. After the Treaty of Stettin in 1630, the town came under the control of the Swedish Empire and became in 1648 the capital of Swedish Pomerania until 1720, when it was acquired by the Kingdom of Prussia and then the German Empire. Following World War II Stettin became part of Poland in accordance with the Potsdam Agreement, resulting in the almost complete expulsion of the pre-war German population. Szczecin is the administrative and industrial center of West Pomerania and is the site of the University of Szczecin, Pomeranian Medical University, Maritime University, West Pomeranian University of Technology, and Szczecin Art Academy. From 1999 onwards, Szczecin has served as the site of the headquarters of NATO's Multinational Corps Northeast.

Notes
TRIP INFO: Set # 1 provides a brief introduction, maps and information for the entire series. Find it at:
https://www.uglyhedgehog.com/t-693834-1.html

EARLIER POSTS of this series: Access my topic list, the new posts are listed in reverse chronological order:
https://www.uglyhedgehog.com/user-topic-list?usernum=45105

Thank you for visiting, I recommend viewing the downloads and look forward to your comments and questions.

.
1 - Title page and first information on the Central/Western Poland segment of the trip on a background view of the Gdansk Marina in evening glow 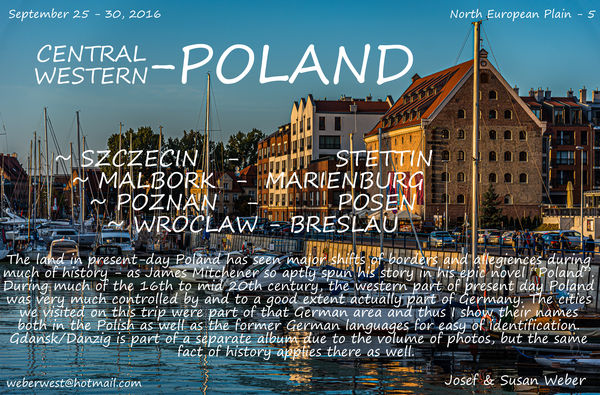 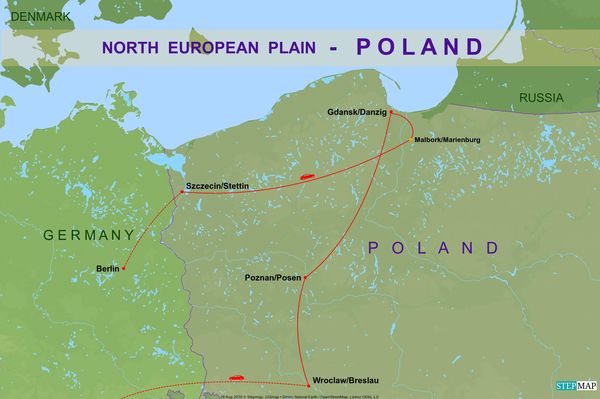 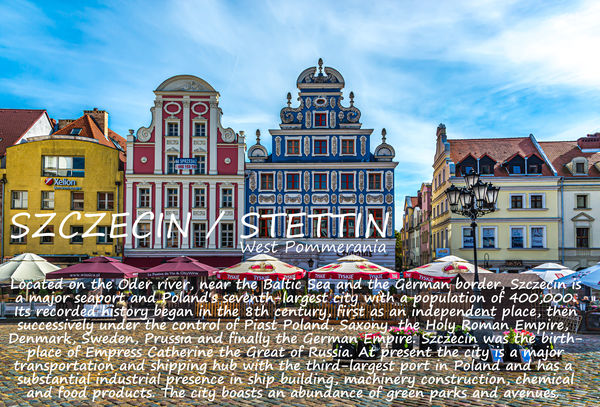 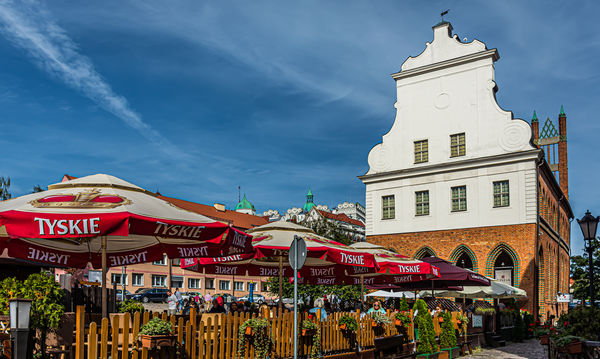 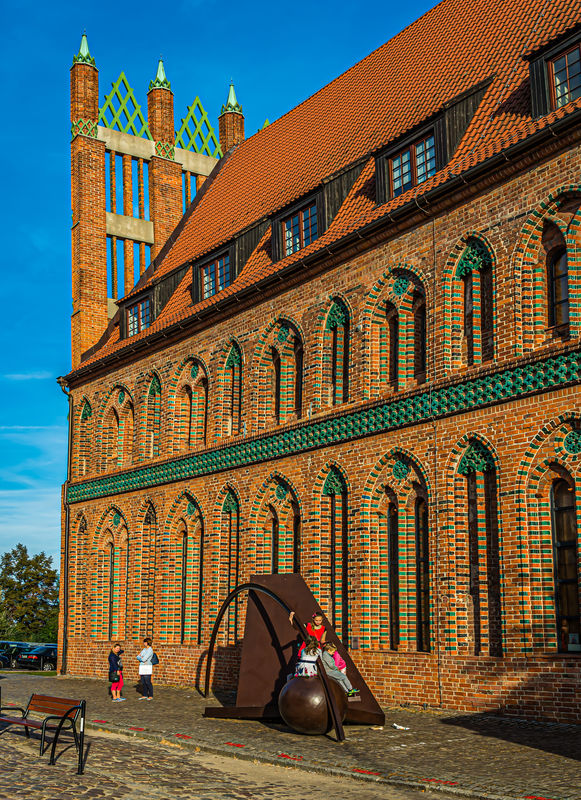 (Download)
6 - Hay Market Square: Part of this old town core, totally destroyed during WWII, has been rebuilt in the late 1990s 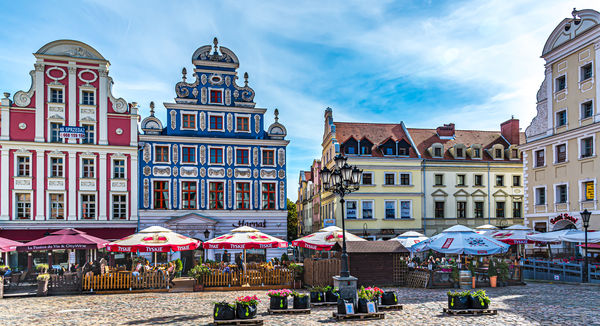 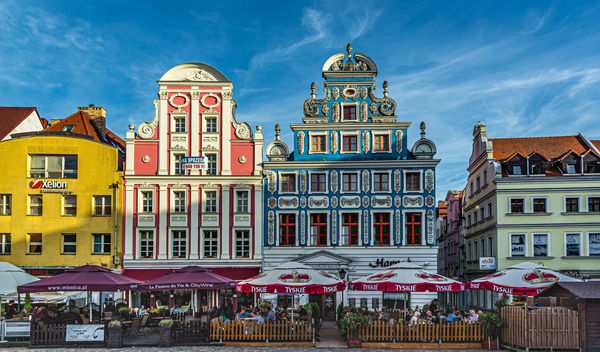 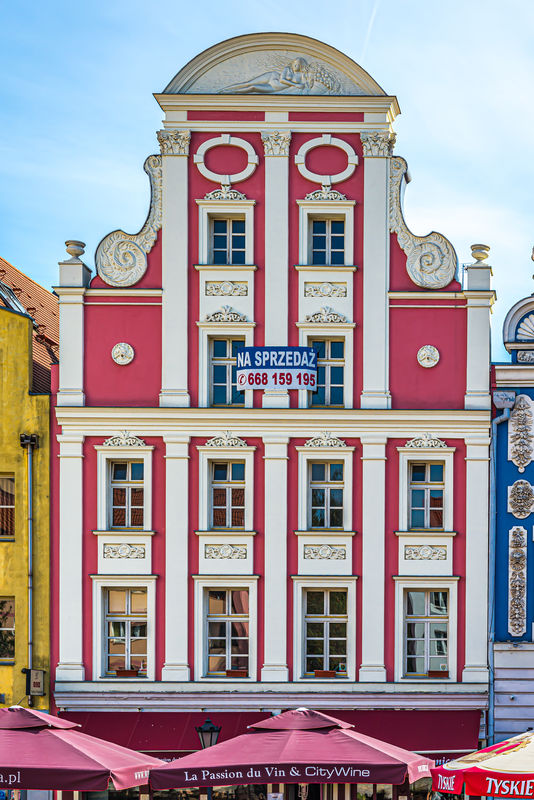 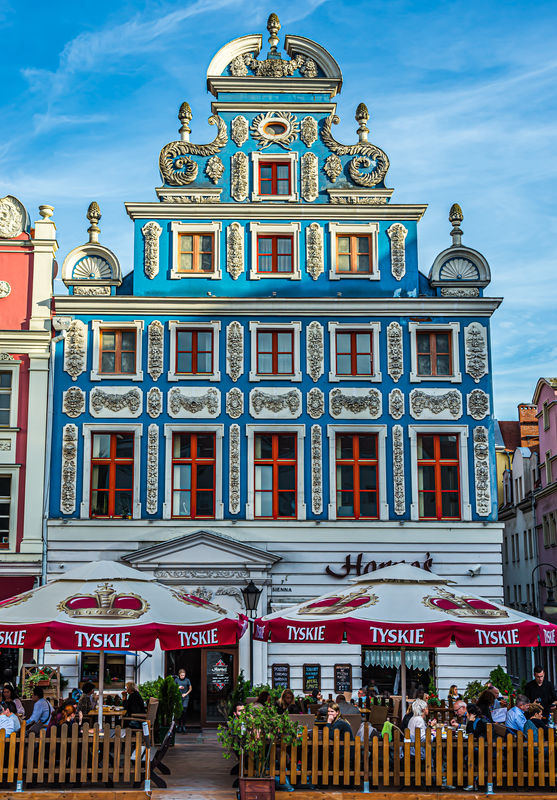 (Download)
10 - Crowning detail of the old house in blue 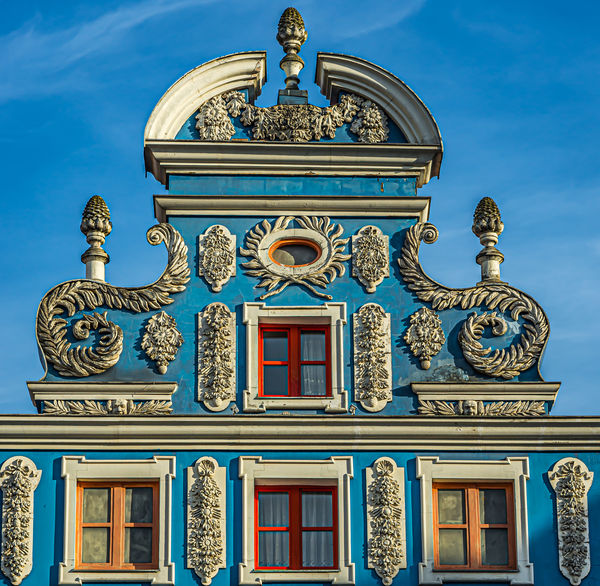 weberwest Loc: Ferndale WA
A - City map of the center of Szczecin/Stettin for your reference 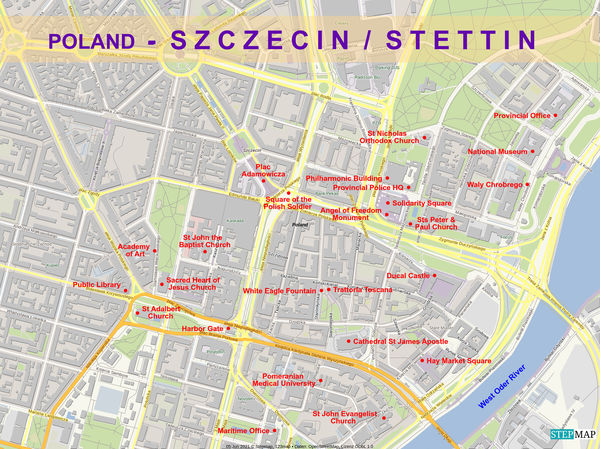 weberwest Loc: Ferndale WA
B - Interesting guide through the city: A guide map describes the route and numbers each site; the reference numbers and path are marked in red on the sidewalk - the most effective and "fool-proof" system we have ever encountered for self-guided city walks 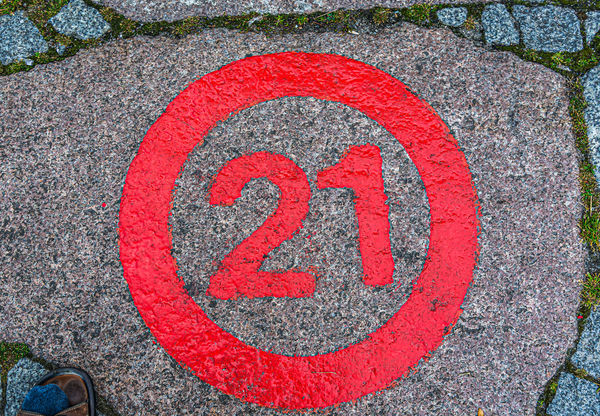 UTMike Loc: South Jordan, UT
Excellent use of the sun on the Hay Market shots, Joe!

Thank you very much Mike - gotta use any help I can get!

Thank you very much Bill!

Vince68 Loc: Wappingers Falls, NY
Beautiful set Joe. Love the shots of Hay Market Square, so colorful. Well done. Look forward to the rest of the series, and thanks for the tour.

Thank you Barbara - Poland is going to be the most colorful place on this tour, so if you love colors, you are in for a treat (I hope to measure up to the challenge ....)

weberwest Loc: Ferndale WA
Vince68 wrote:
Beautiful set Joe. Love the shots of Hay Market Square, so colorful. Well done. Look forward to the rest of the series, and thanks for the tour.

Thank you Vince, glad to hear that you love the Hay Market shots and the colors, Poland's architecture is similar to the one we have seen in Germany, but the decorations are overall much more colorful, so I hope that the next 50 or so episodes are going to be great also!

Thank you very much Earnest!

Thank you Ken for your kind words - as with all my introduction pages to a new country/city, this one is on the very long side, but it will get more condensed with the following sets.

Reply
Page 1 of 4 next> last>>
If you want to reply, then register here. Registration is free and your account is created instantly, so you can post right away.
Photo Gallery
Home | Latest Digest | Back to Top | All Sections
Contact us | Privacy policy | Terms of use | DMCA
UglyHedgehog.com - Forum
Copyright 2011-2021 Ugly Hedgehog, Inc.