Pixelmaster Loc: New England
To even out the weathering of the ship the U.S.S. Constitution does a turn around cruise each year.
This one was taken some time ago in the 1980's. 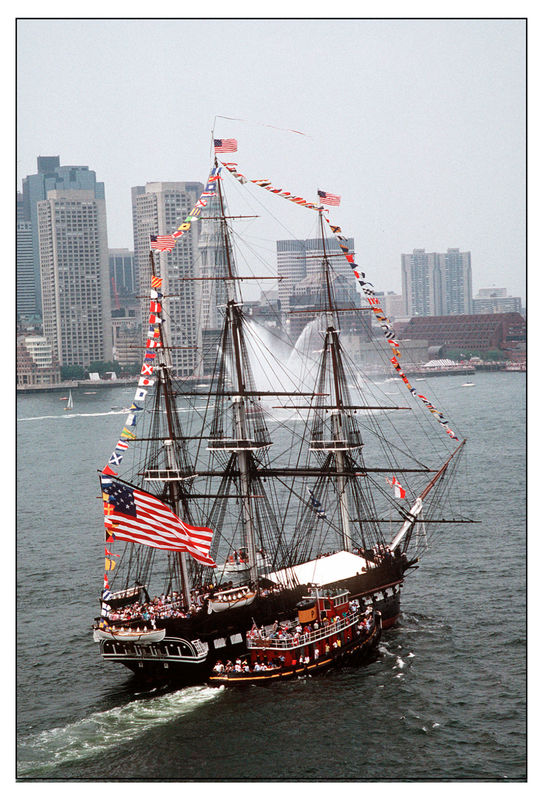 J-SPEIGHT Loc: Akron, Ohio
Pixelmaster wrote:
To even out the weathering of the ship the U.S.S. Constitution does a turn around cruise each year.
This one was taken some time ago in the 1980's.

Reply
May 5, 2021 09:16:31   #
billwyld Loc: Philadelphia, Pa
I travelled to Boston on July 4, 2019, took a Harbor Cruise and happened to be on the water at the time that the Constitution did it's annual sail around the harbor on The Fourth. I always had an affinity for the ship. Many years ago I travelled to Baltimore Harbor and visited The Constellation, sister ship to the Constitution. Got into a discussion about the two ships with a friend and I ended up writing the Constitution Captain for a confirmation. He replied. I no longer have the letter.

The constitution is the longest active sailing ship in the US Navy. Must sail at least once a year to keep up it's status as an active Naval Ship. I have a photo of the picture I took in 2019, put it on canvas in my home office.

Retired CPO Loc: Travel full time in an RV
josquin1 wrote:
What? It has an engine in it? Must be the iron topsail.

The tug alongside might be helping her a bit!

Hereford Loc: Palm Coast, FL
Some years back Boston had a big tall ship celebration that had all the ships sail out the harbor and back. For this event the Constitution was flying a few canvas sails while being towed in and out as the parade leader of the event. Very impressive as we sat on a boat at the harbor turn around point.