SteveR Loc: Dallas
My Dad would have loved this one 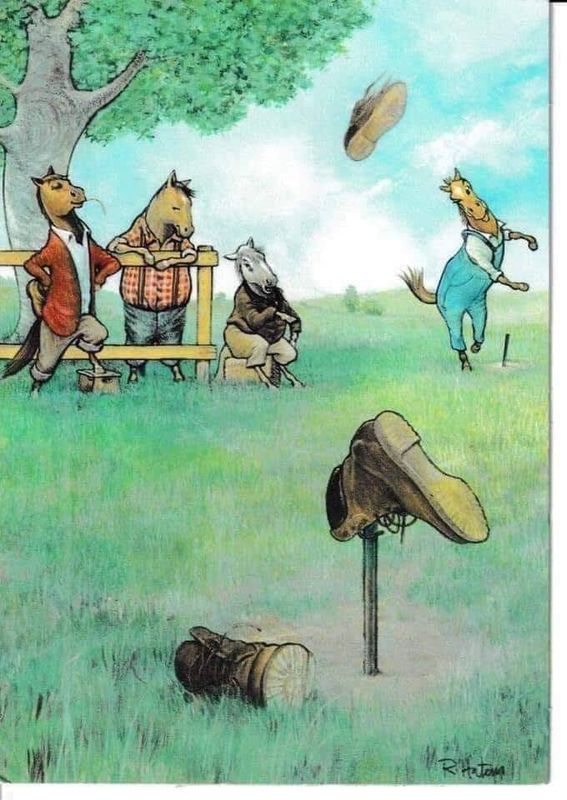 --Bob
SteveR wrote:
My Dad would have loved this one

Bob....Dad was an avid horse shoe player. He played in a league, doing well, but he could never beat the Barclay brothers who were the best throwers. Later, when my parents built a new house on a double lot, Dad came across some nice clay and put in a court in the back yard. He also put in a basketball goal so he could shoot free throws. He'd win first in the Senior Olympics, making 23 out of 25. Quite the competitor.

junglejim1949 Loc: Sacramento,CA
SteveR wrote:
My Dad would have loved this one

RowdyRay Loc: MN
Lol. I just sent that to my father. He and his father played in leagues for years. Had a pit out back and us boys learned how to play. They were hard to beat on their own and, almost impossible if they played together. So, we got pretty good at it.

Got married in May of 82. That July I attended the first family reunion on the Inlaw's side. Held in Baldwin Wisc. and about 200 people showed up from all over. Turns out they had a horseshoe tournament every year. Took it very seriously, too. My FIL and his cousin held the title for years. My new BIL asked if I could play. I just smirked and said, "Maybe." You can probably see where this is going. We took them down. Should have seen their faces when I got a ringer and a leaner on my first throw! And my BIL....thought he was going to pee himself. He'd been trying to beat them for years. Lets just say it wasn't the best way to start a marriage. But, totally worth it. Lol. Thanks for a great memory.

The pit is still out back and my brother has one at his place up north. We play on holidays or family get togethers. My 80 year old father will still give us a run for our money.