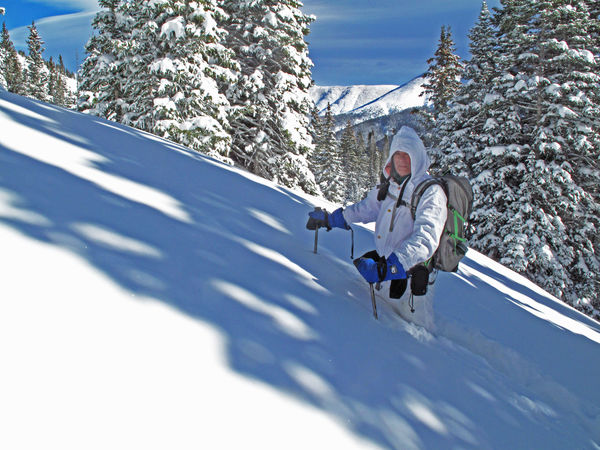 tradio Loc: Oxford, Ohio
That looks like a workout!

UTMike Loc: South Jordan, UT
Very nice shot, but that is a lot of effort, Paul!

rmalarz Loc: Tempe, Arizona
Paul, that looks like it might involve a lot more effort than a lot of people would like to exert. You did capture the moment well, though.
--Bob
Paul J. Svetlik wrote:
... Anyone?

Xmsmn Loc: Minnesota
Looks like this might be a case for using the old army surplus “tennis racket” shoes. Regardless, jealous of your surroundings. Thanks for sharing.
Mark

MtManMD Loc: Beaverton, Oregon
Fresh Colorado powder? Looks like you are sinking in a lot even with snowshoes. I remember stepping out of my cross-country skis once in soft Colorado snow and about disappeared.

quixdraw Loc: American Free States -- Montana
Darn, that looks like fun - NOT! I snowshoed on the North Shore of Superior several times. No sticks, but a set of Vintage wood and gut Trail shoes, if I'd sunk in like that, the first time would have been the last.

Curmudgeon Loc: SE Arizona
Great shot, beautiful country. I thought snow shoes were supposed to keep you on top of the snow

John from gpwmi Loc: Michigan
Awesome shot, Paul. That is some snowshoe outing. He should of had skies on his back for the trip down.

cameraf4 Loc: Delaware
Don't tell me he's on his way to the gym for a workout. Nice composition.

Stash Loc: South Central Massachusetts
I would never be able to do that. I would be huffing and puffing and keeling over