Curmudgeon Loc: SE Arizona
Turkey Vultures are both resident and migrants in Southern Arizona and sometimes they have markings that enable me to identify individual birds. Zone-tailed Hawks are almost identical to Turkey Vultures except for a feathered head and a banded tail. I reach out for all vultures to see if they have unique markings like the broken primaries and the white spot in the tail of if, rarely, it might be a Zone-tailed Hawk.

Here is a terribly over processed shot to show what I mean. 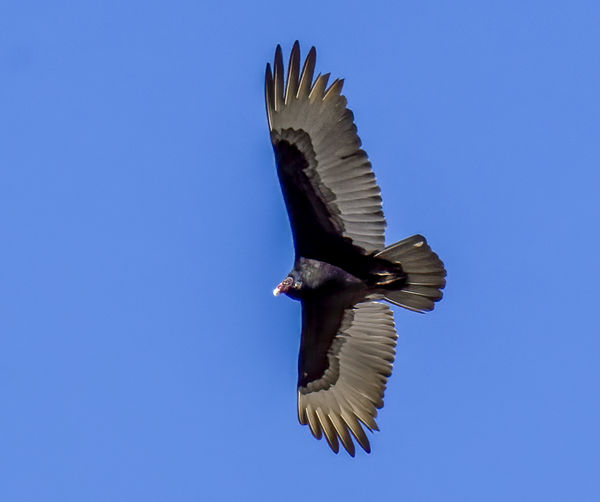 Katydid Loc: Davis, CA
Interesting being to id particular birds! I have done that with hawks only--rarely.

Curmudgeon Loc: SE Arizona
Thanks for looking Katy. This will only work until it molts unlike my 3 toed raven and 2 toed Cactus Wren

jederick Loc: Northern Utah
Nice capture...how did you get him to pose!!

| Reply
Feb 16, 2020 10:27:52   #
bamfordr Loc: Campbell CA
Then there are the California condors. They often fly with turkey vultures. Fortunately the underside wing colors are reversed (white leads black). And they are conveniently numbered.

Curmudgeon Loc: SE Arizona
jederick wrote:
Nice capture...how did you get him to pose!!

I offered him a bag of Cheetos

Curmudgeon Loc: SE Arizona
bamfordr wrote:
Then there are the California condors. They often fly with turkey vultures. Fortunately the underside wing colors are reversed (white leads black). And they are conveniently numbered.

Thanks for looking. In 1986 I was looking through the avian collection at UofA and found a California Condor specimen collected near Tucson in 1898. Again Condors are in Arizona but this time they are from a captive breeding program Some of them actually walk into the Grand Canyon NP Visitor Center begging for food.

Thanks. I've always wanted to ask. What is a Swamp Cork

It all started around 1942 when my much older sister and her child, my nephew, came back home to live with us when her military husband was sent overseas, during WW-2. My nephew was unable to pronounce my given name correctly and started calling me Corky and has been what most others have called me since. The swamp part comes from my almost lifelong love of wetlands(swamps) and later in life we settled along the banks of the Chickahominy River which is a beautiful little Cypress lined river located about 20 miles west of Williamsburg, Virginia. There is quite a bit of history concerning the Chickahominy and Powhatan natives and the early settlers, and the river empties into the James River about 10 miles east of us near Jamestown, Virginia.