petercbrandt Loc: New York City, Manhattan
Here are my memories of 9/11 from when I photographed a supposed small plane crash into the WTC towers. I went up to the roof of our building 11 stories on 5th Ave /15th St in Manhattan. After seeing the 2nd aeroplane crash, I went to my local film lab for processing. Upon coming back I went up with more film and saw the 2nd tower collapse. Each series has more frames per insident. I'm getting goose bumps as I load these shots and tears are coming.
Nikon F4 with 300mm f2.8 and 2x tele extender= 60mm. Exktachrome 100.
Peter 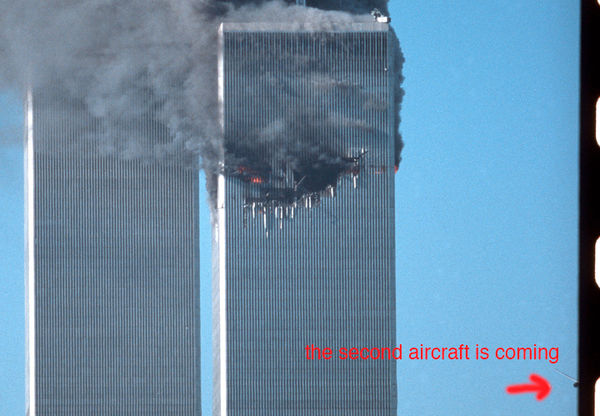 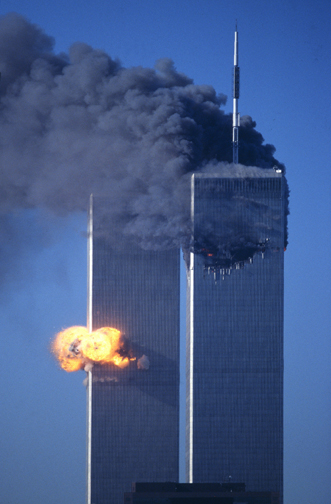 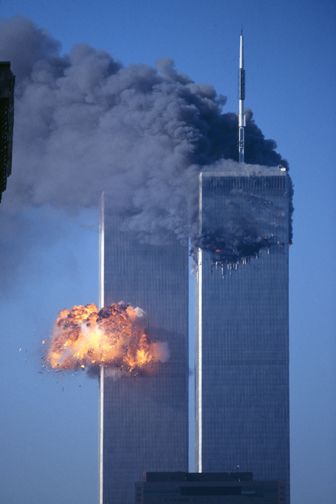 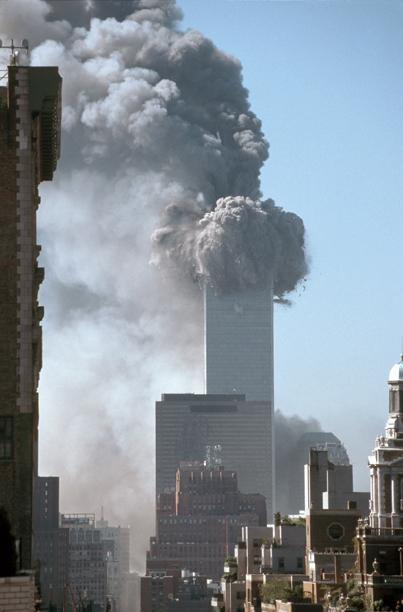 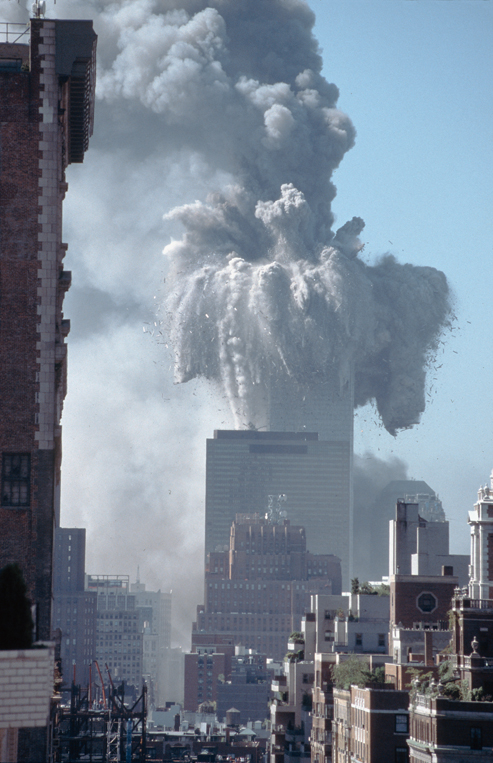 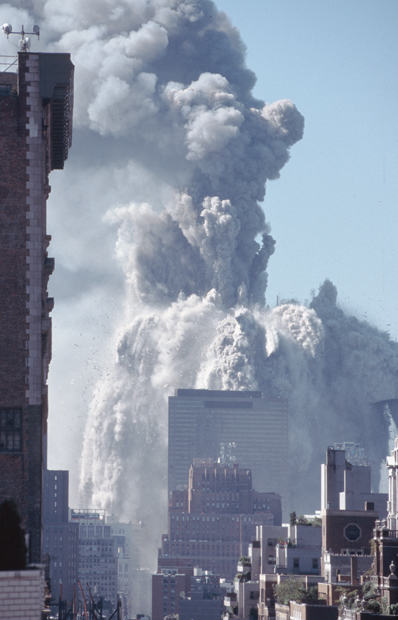 AndyH Loc: Massachusetts and New Hampshire
Remarkable images, Peter. Right up there with Pearl Harbor in the list of days we will never forget, and emotions that will be triggered each time we see the visual evidence.

Linda From Maine Loc: Yakima, Washington State, home since 2002
We will never forget.

BlueMorel Loc: Southwest Michigan
Something no one should experience or have to witness. I saw the broadcast of the first one, then had to leave for class. No one came into our classroom to tell us what was going on during our class. We came out at 11 a.m. to empty hallways and TV's tuned to the news after the towers had collapsed. My 9-yr-old was at school and I was stuck on campus for hours until the streets had cleared enough to get my car home. The school did not send the kids home early, thank goodness, so I was home by the time he got home. Your photos bring back memories of the terror even we who were far away felt, and our country has not been the same since. Thanks for sharing.

Rongnongno Loc: FL, FR
When you think about, this (9/11), like many other things, will be forgotten regardless of our intent.

Remember that anything really survives only as long as there are 'survivors' or 'witnesses' of an event. Our 'memories' as 'human' is rather short. It is both a good and a bad thing.

blue-ultra Loc: New Hampshire
Oh the horror of it all. I remember seeing the second plane hit the tower on the TV. I cried like a baby knowing that many souls were in that building and on that plane. While I do not need a reminder of the event I really appreciate you sharing those photos with us, thank you!

Paul J. Svetlik Loc: Colorado
In the Fifties, to even think about a plane being intentionally driven into a tower building of this size was unthinkable - for the architect or for the rest of us.
However, in the summer of 2011 - on Sixty Minutes CBS program Leslie Stahl was interviewing some sheik (probably in Saudi Arabia) when the sheik braggingly described the vulnerability of skyscrapers (he mentioned in New York) for being attacked by a plane. That interview caught my ttention so much, that when I heard Dan Rather reporting the attack, I was not surprised.
I wonder, if anybody else remembers watching the same CBS interview?

AzPicLady Loc: Behind the camera!
It was so sad. And so scary. We are not sheltered by separation from the rest of the world. It was only 17 years ago and almost instantly we were being required to believe that those who perpetrated this crime weren't guilty, weren't to be considered as enemies. We said we'd remember the Alamo, but now kids are being taught that the heroes of the Alamo weren't heroes at all, but a band of rebels. Unfortunately, given the nature of the current US political climate, it won't be very long before we have also forgotten this last atrocity and explained and excused it away.

texaseve Loc: TX, NC and NH
Fabulous images of a horrific crime! I remember being glued to my TV in Texas, staring in disbelief, and worrying that San Antonio might be next with all it's military bases. I figured an invasion for sure, being a military pilot's daughter (and sister). I agree with you AzPicLady, and just seems NO ONE is to be held accountable for anything these days. I don't even want to get started on this stuff, I get so angry with the entitled! It was truly a sad, sickening and frightful day.

Rich475 Loc: North of San Francsico
petercbrandt wrote:
Here are my memories of 9/11 from when I photographed a supposed small plane crash into the WTC towers. I went up to the roof of our building 11 stories on 5th Ave /15th St in Manhattan. After seeing the 2nd aeroplane crash, I went to my local film lab for processing. Upon coming back I went up with more film and saw the 2nd tower collapse. Each series has more frames per insident. I'm getting goose bumps as I load these shots and tears are coming.
Nikon F4 with 300mm f2.8 and 2x tele extender= 60mm. Exktachrome 100.
Peter
Here are my memories of 9/11 from when I photograp... (show quote)

Fantastic photos and reminder Peter. Would it be possible to send them all on 'download'. Would love to have them on my office wall.
Luigi

| Reply
Sep 11, 2018 13:29:41   #
Tomcat5133 Loc: Hallandale Beach, Florida
Amazing, amazing photos. My son was in NY and used to visit Trade Center. His office finally called us and said he was not their.
My cousins son was street going to his building across and stuff rained down the street around him. My Stock Broker lost his best friend.
My client a CEO major tech company was giving a speech in building 2. He made it out. We got downtown within a week and the strange
skeliton standing up was the worst sight. My cousin lost a job as graphics manager of a big company nearby. She never recovered
and got another job. I had a terrific audio technician who I worked with and he was their survived and never recovered mentally.
We are Americans and I hurt so bad for the people we lost and the pain caused. I am patriotic and was mad. But was in my late 50's.
My only thought is when I see the damage and carnage done in countries like Syria and others around the world I wonder why?
We are involved in conflicts I think this is all crazy. It is the children who suffer the most. I posted a picture I put online of a yaqazi
young girl escaping alone from ISIS on a road alone with an Uzi on her shoulder and told my kids your problems are not that big.
But this girl was escaping from death and rape by ISIS. It is still on facebook.

DJ Mills Loc: Idaho
Thanks for helping us remember. Would you believe it -- most of this year's high school seniors weren't born yet.