mallen1330 Loc: Chicago western suburbs
In the 1920s, Berwyn was the area's fastest growing suburb. The city's stringent building codes resulted in block upon block of well-built brick two-story bungalows. Many also contained elaborate design elements typically not seen, such as stained glass windows, clay tile roofs, terra cotta, and intricate brick patterns. Today, Berwyn is noted as having the most significant collection of Chicago-style bungalows in the nation 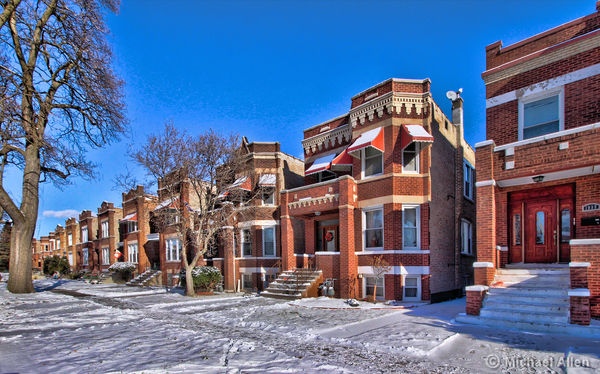 RichardTaylor Loc: Sydney, Australia
Very nice. Thanks for taking us there.

rjaywallace Loc: Wisconsin
Michael, what a marvelous evocative archtectural image! And you managed to pick one of the region’s rare blue sky days. I lived in Evanston and hung out in Rogers Park and the north side of Chicago before moving to Downers Grove and further west to Naperville and Aurora - bungalows are de rigueur for the entire area. And you nailed it with this fine photograph.

aaciolkowski Loc: Sugar Grove Illinois
I grew up in Berwyn. Your picture is of 2 flats not bungalows. Bungalows are single family homes.

mallen1330 Loc: Chicago western suburbs
aaciolkowski wrote:
I grew up in Berwyn. Your picture is of 2 flats not bungalows. Bungalows are single family homes.

As the title states: "a town full of classic Chicago bungalows and two-flats" My message was more a description of the neighborhood, not this particular photo.

johneccles Loc: Leyland UK
Lovely photograph, it makes a pleasant change to see an image of a US town without the usual ugly tangle of overhead power and phone cables.

| Reply
Dec 29, 2017 15:00:36   #
Tikva Loc: Waukesha, WI
Great set. Many, many years ago I lived on the West Side of Chicago in what was called 'Back of the Yards'. It was a nice ethnic, mostly Polish, neighborhood at the time I lived there in the early to mid 1960's. I have heard that the neighborhood is no longer that nice, but I haven't been back in 50 years. WOW, it doesn't seem that long ago, but I guess it is. There were a lot of bungalows in that neighborhood as well.