weberwest Loc: Ferndale WA
The GOLDEN TRIANGLE is the area where the borders of Thailand, Laos, and Myanmar meet at the confluence of the Ruak and Mekong rivers. The name "Golden Triangle" - coined by the CIA - is commonly used more broadly to refer to a larger area that overlaps the mountains of the three adjacent countries. The only information to the size of this "larger area" that I can locate comes from Wikipedia, which mentions the size of 950,000 km² (367,000 sq miles) which is patently impossible as the entire land area of these 3 countries amounts to about 1,400,000 km² (550,000 sq miles). Thus I cannot provide a reliable indication of the size of the area labeled as "Golden Triangle"" - it could conceivably be 1/10th of that figure and the article added one zero too much.

The next eight posts will cover our foray into the area, taken as a one-day side trip from our stay in Chiang Rai. Even though the area covers these 3 countries, we basically stayed within Thailand most of the time, with the possibility of a brief visit into Myanmar, which I did not participate in as we earlier visited that country in much greater depth, and a brief stop at a market in Laos. I provide a separate map to easier depict the route we took. While most of the trip was taken on our regular bus, in the higher and less developed area, particularly in and around the Ban Doi Sa-Ngo countryside, we used a number of the locally common "Iron-buffalo" trucks, very crudely fitted for human transportation. We also experienced a short cruise on the Mekong River, along the border area of the three countries, where we briefly set foot in the market area of Donsao, a riverside community in Laos.

IRON BUFFALO ENGINE - Unfortunately I was not able to find any description online for this contraption, so I have to rely on what I can remember being told by the tour guide over nine years ago. The contraption is a very basic, low cost gasoline engine, called the "Iron Buffalo" as it replaces the power previously provided by a live buffalo. The design of this engine is very rudimentary, and so is the way it is incorporated into all kinds of vehicles very widely used in South East Asia, both as two wheeled contraptions for pulling a plow or other agricultural implements or, as in the case demonstrated here, very crudely fitted onto a transportation vehicle.

In today's post, I will show one of these engines and how it is fitted into our rural transportation "bus" and show a few of them on the road as we move through the countryside.


Notes
TRIP INFO: Set # 1 provides a brief introduction to THIS SERIES on SOUTH & EAST ASIA. See it at
https://www.uglyhedgehog.com/t-724330-1.html

EARLIER POSTS of this series: Access my topic list at UHH, the new posts are listed in reverse chronological order:
https://www.uglyhedgehog.com/user-topic-list?usernum=45105

Thanks for visiting, for improved clarity please view the downloads. I look forward to your comments and questions.

1 - My album title shot of the rural landscape of the Golden Triangle, set in the Ban Doi Sa-Ngo countryside 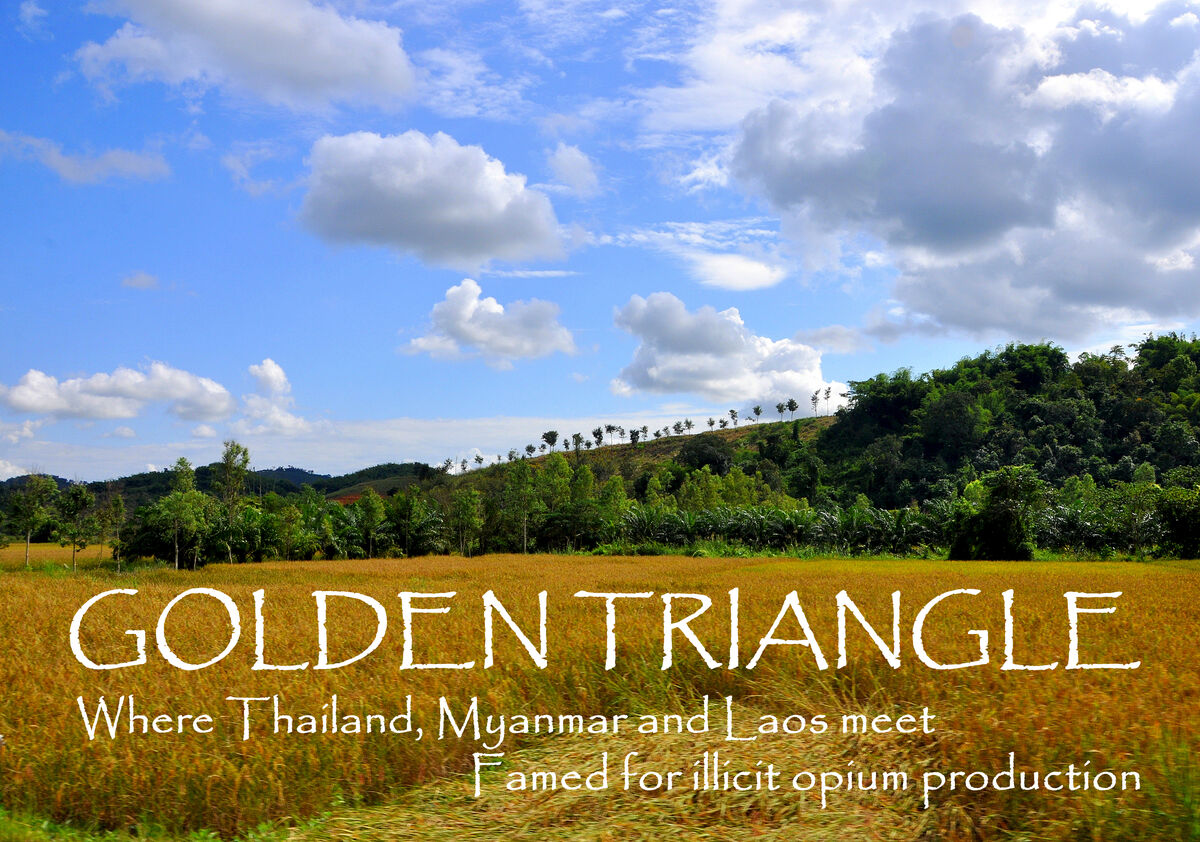 2 - A crude "rural bus" fitted with an "iron-buffalo" engine waiting to bring us to the La Vallee artist residence, gallery and restaurant 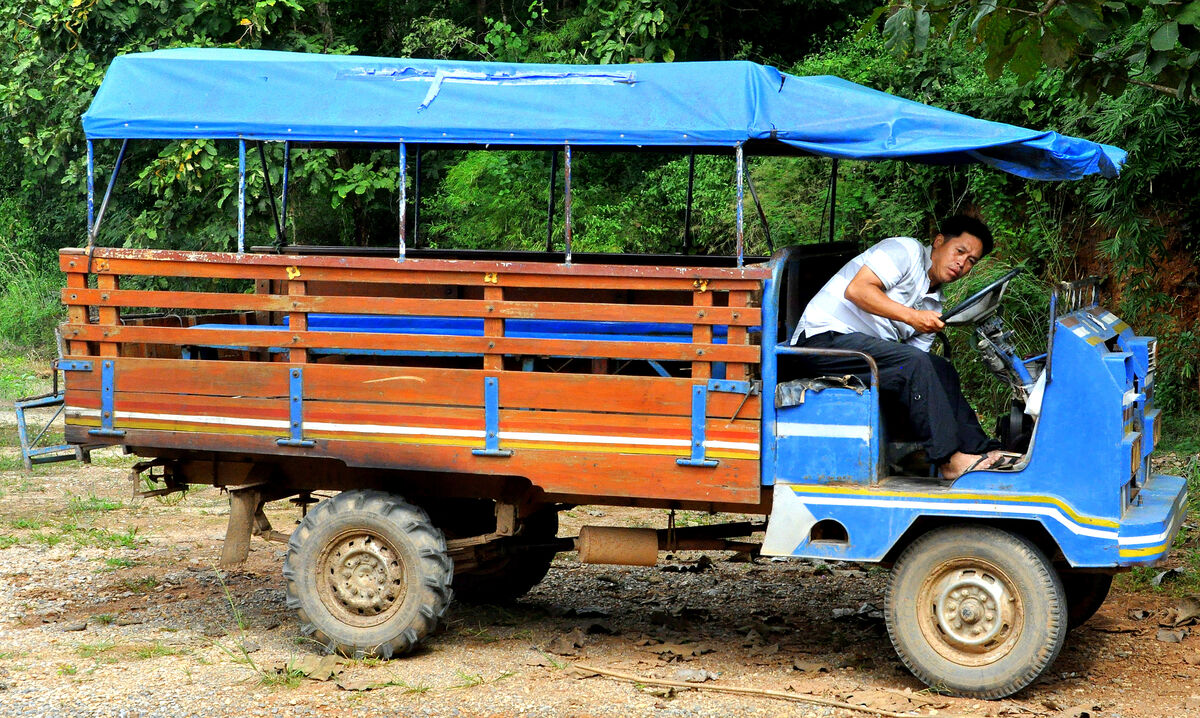 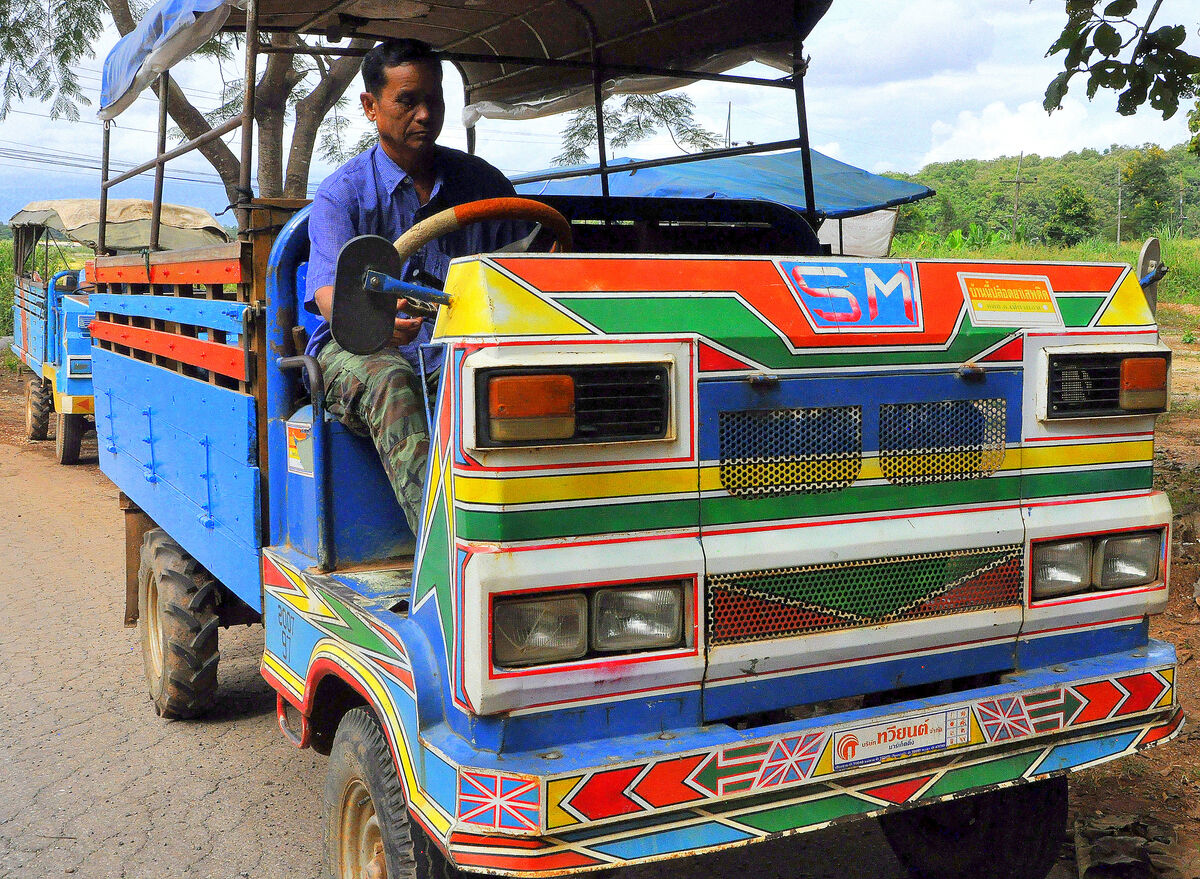 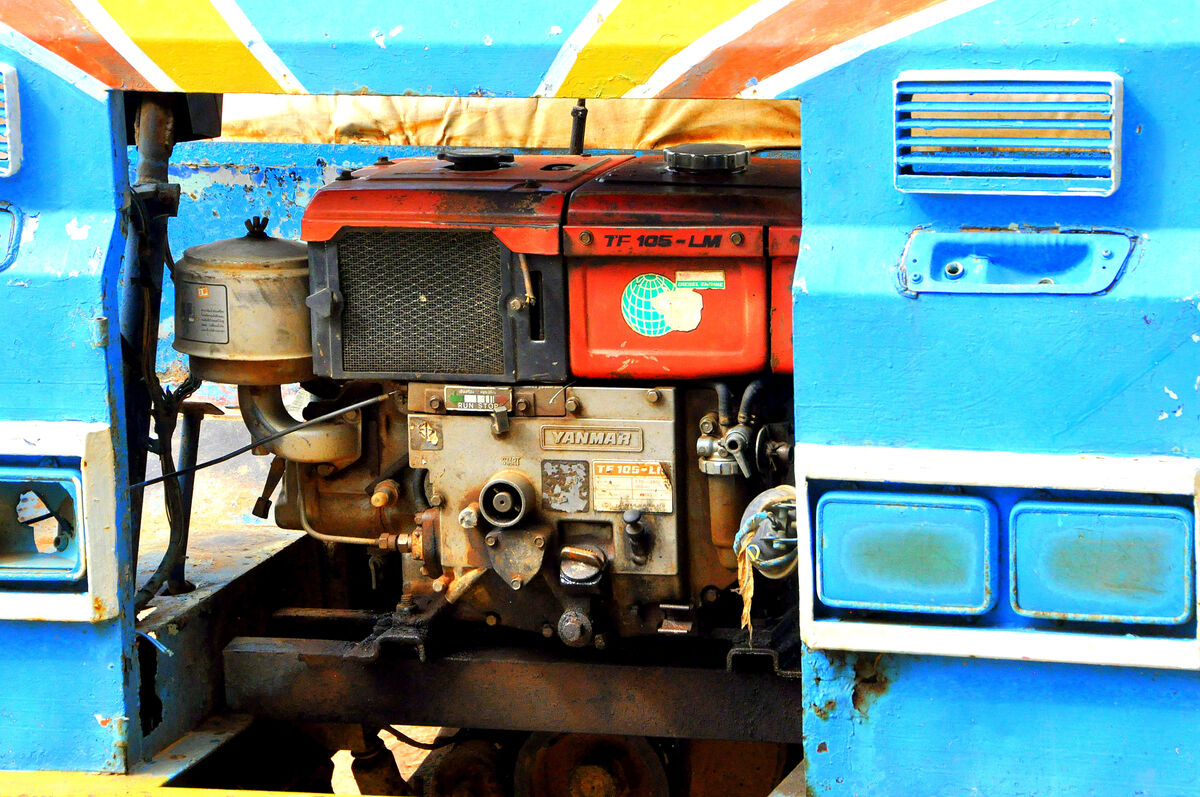 5 - As this image demonstrates, the engine is not only exposed to the front, but also situated in a totally open space right to the side of the driver and his two brake and gas pedals - regulatory authorities in our parts would probably faint ... 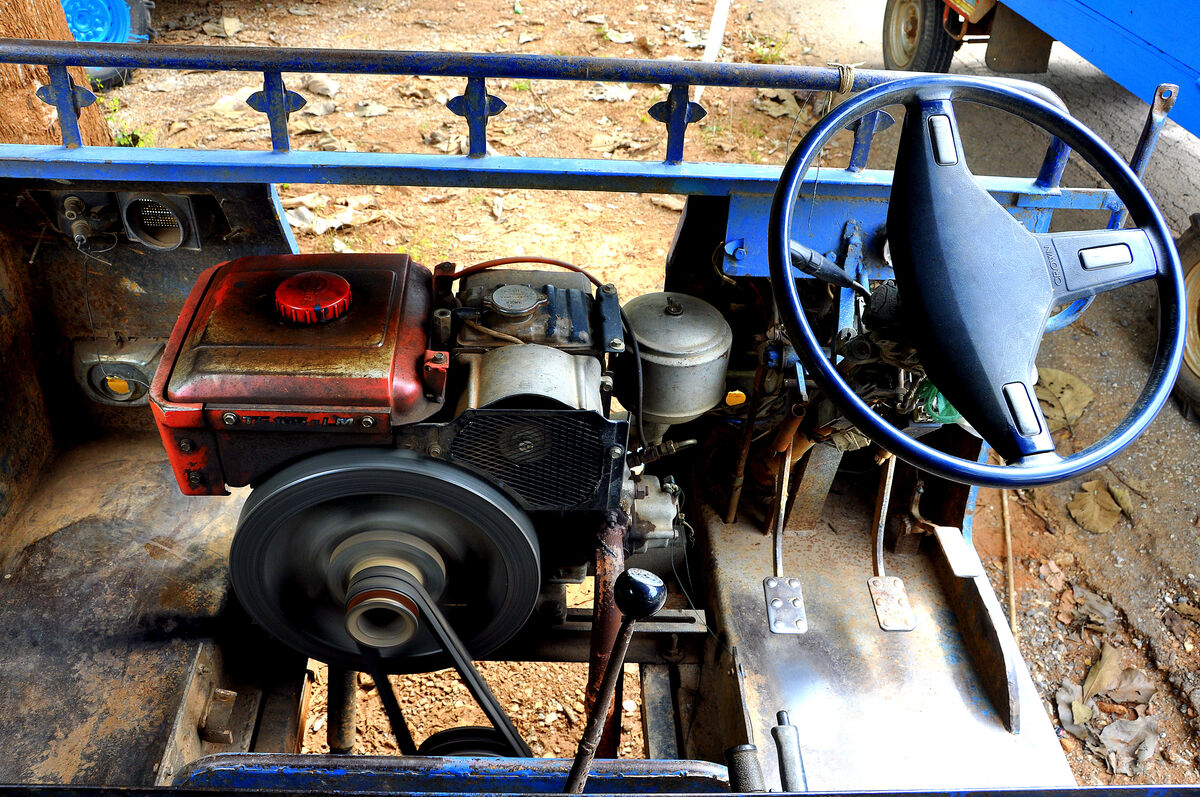 6 - The first group takes off in their rural bus 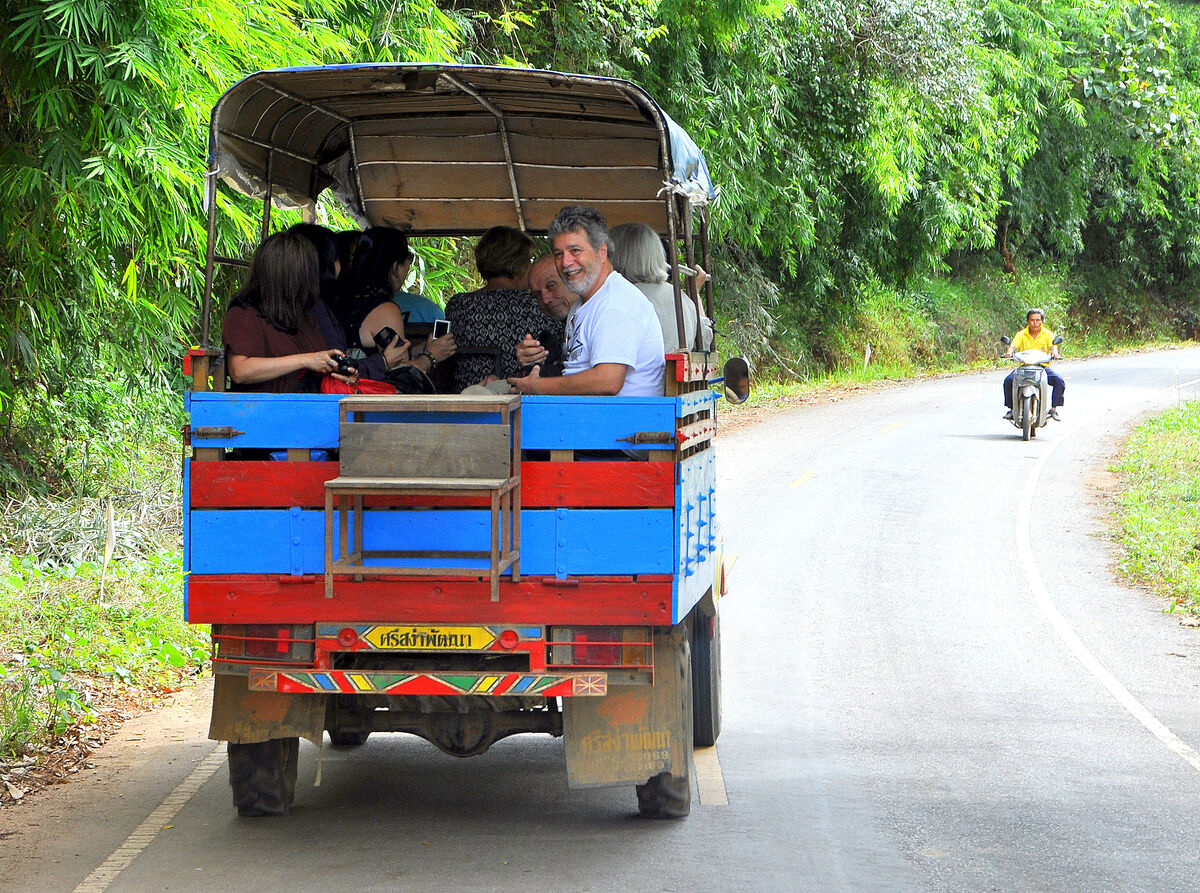 7 - Our happy companions sitting on their wooden benches, note the improvised step-contraption at the rear of the bus 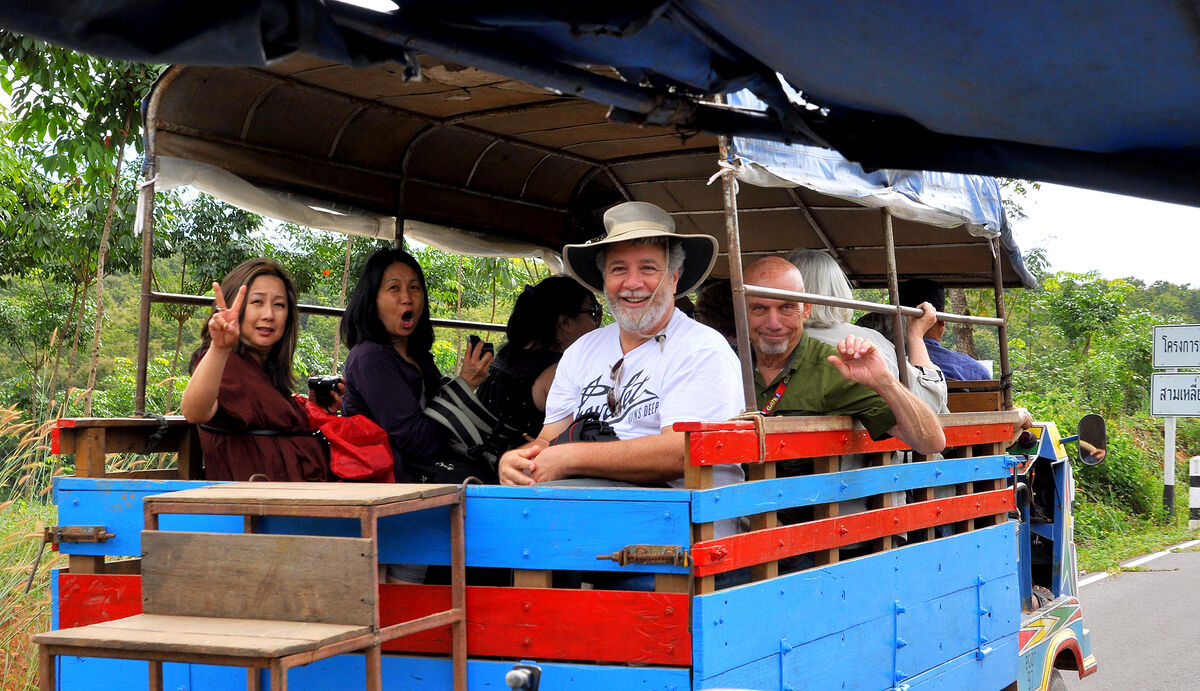 8 - Cruising on initially good roads: two of our buses climbing a hill 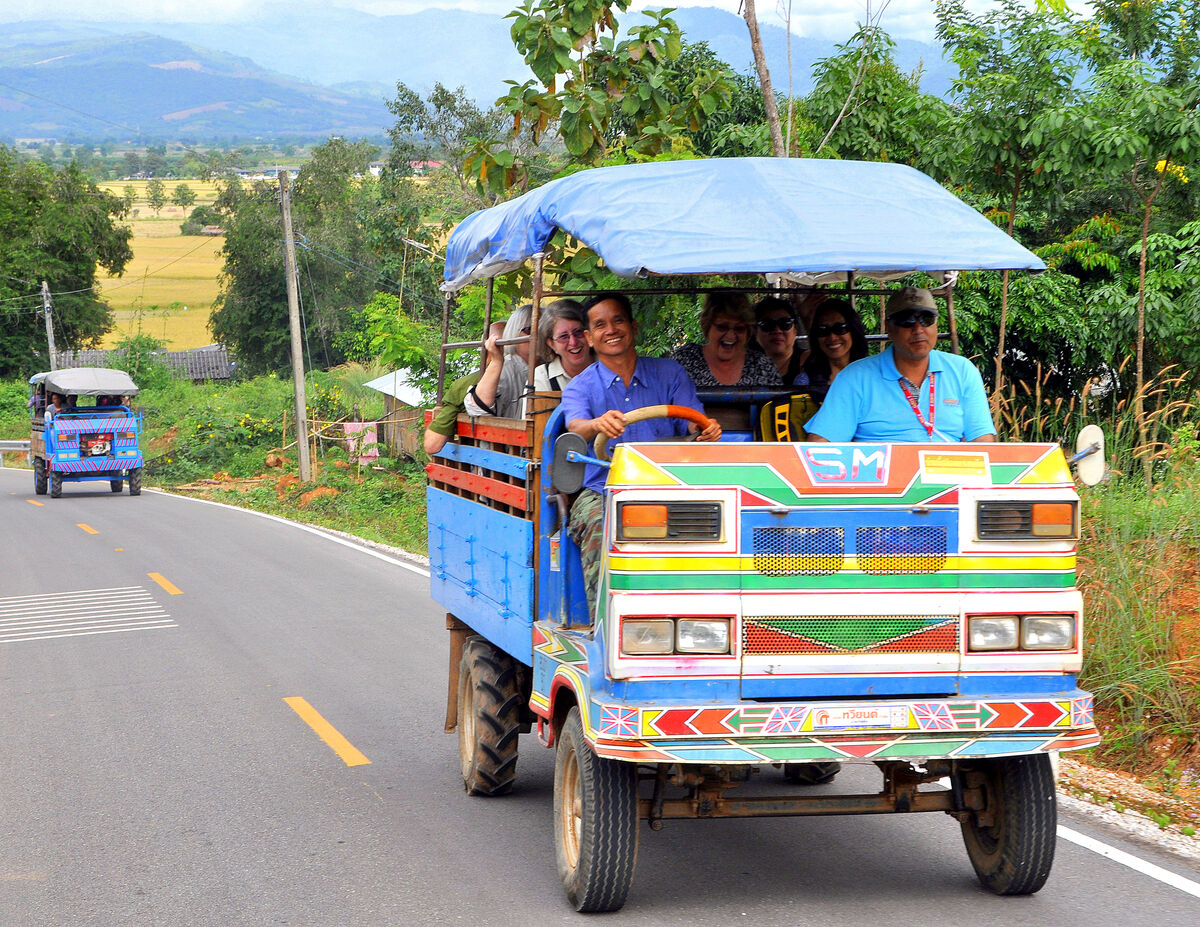 9 - Underpowered they might be, but that does not hinder the last bus to start an overtaking manoeuvre on a windy road …. 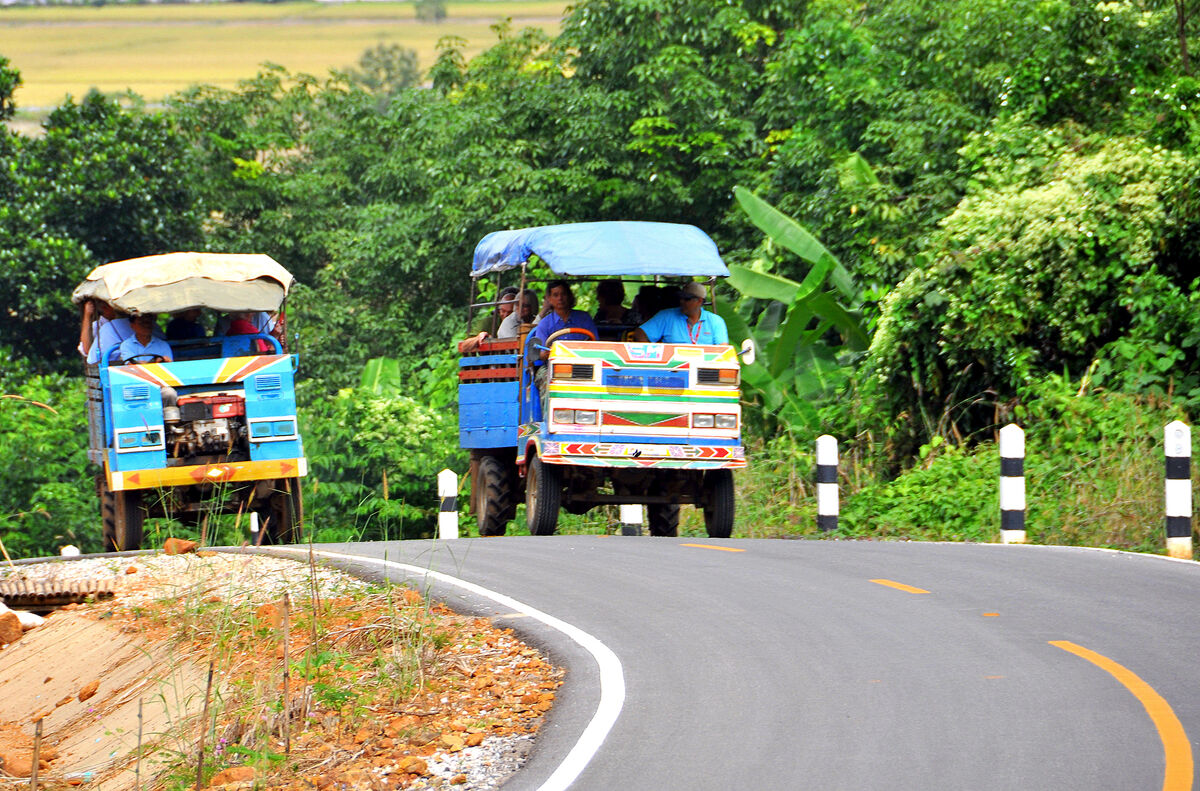 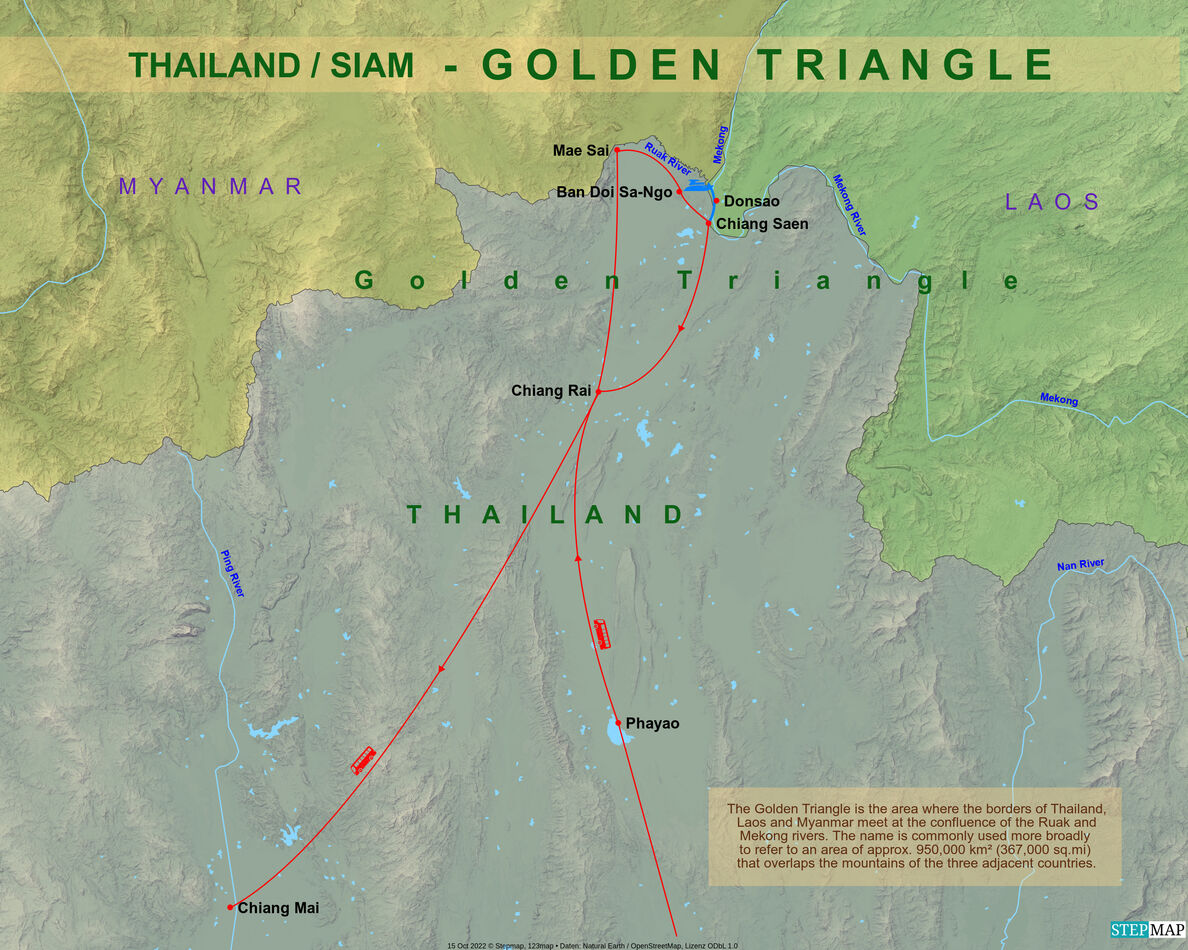 11 - Trip map of the Thailand segment of our tour, the Golden Triangle is located at the very top of the map 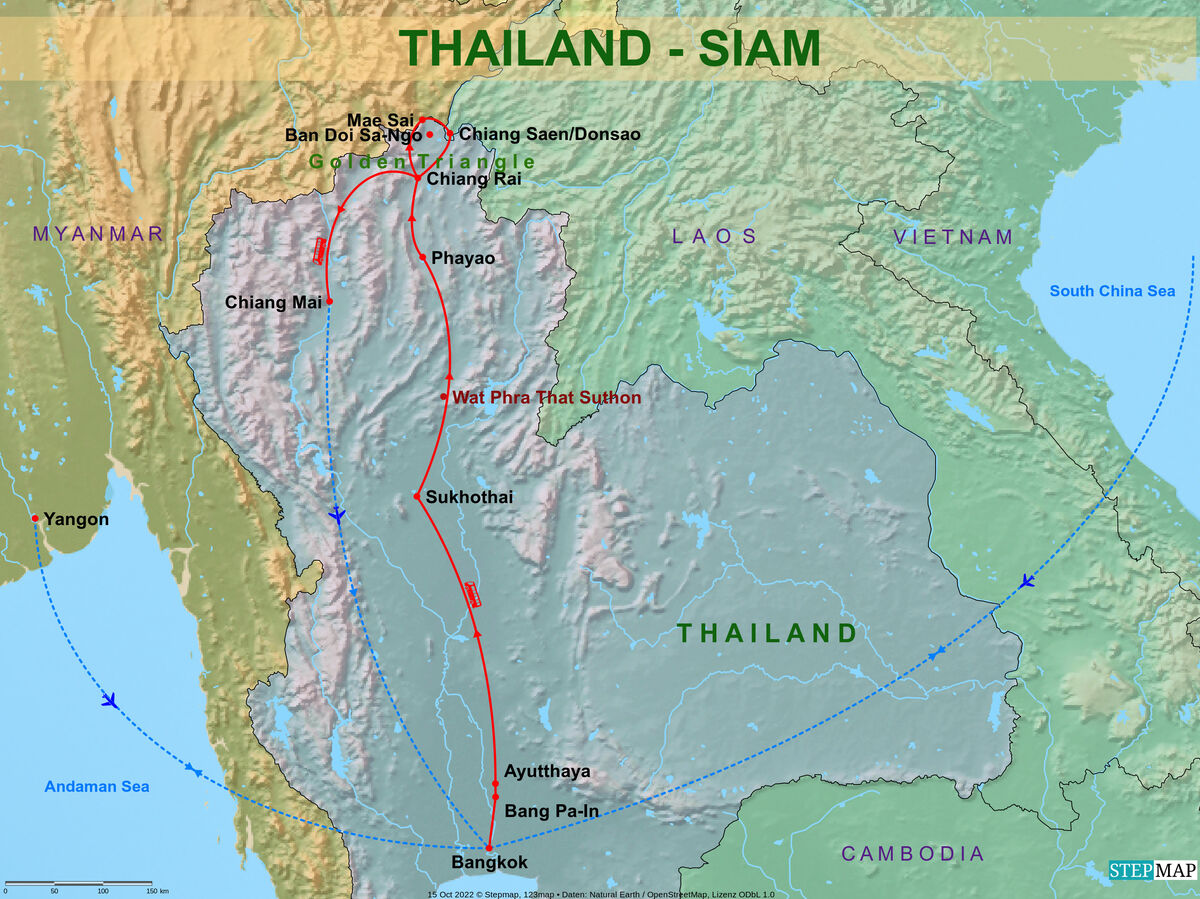 anotherview Loc: California
Good morning. You go where few in the West go, and bring back interesting photographs of life there in your travels. Thanks for sharing.
weberwest wrote:
For your reference:

Earnest Botello Loc: Hockley, Texas
Great street series, Joe, it's amazing how these people do what ever it takes to earn a living.

NMGal Loc: NE NM
Looks like fun, Joe. Are those tractor tires on the rear?

Reply
Nov 23, 2022 11:41:49   #
lnl Loc: SWFL
Yes, you certainly have traveled many places where few westerners have traveled. I’m envious!
Your transportation was certainly rudimentary, but apparently got where it needed to go! Safety? No, but you arrived safely.
What would you say was the demographic composition of your group? Especially age, ethnicity and where they live now.

weberwest Loc: Ferndale WA
anotherview wrote:
Good morning. You go where few in the West go, and bring back interesting photographs of life there in your travels. Thanks for sharing.

Thank you very much for your very nice comment. We have been lucky to be able to see a few interesting and unusual corners in this world, but there is so much more out there! Glad you liked the shot and it is a pleasure to have you "along on the tour".

weberwest Loc: Ferndale WA
Earnest Botello wrote:
Great street series, Joe, it's amazing how these people do what ever it takes to earn a living.

Thank you Earnest, yes, traveling to remoter parts of the world does often show the local ingenuity.

Thank you Barbara. I don't know much about tires, but these rear tires must be for extra traction when it gets into the muddier parts of the road system. Maybe somebody with more knowledge in these matters can chime in?

weberwest Loc: Ferndale WA
lnl wrote:
Yes, you certainly have traveled many places where few westerners have traveled. I’m envious!
Your transportation was certainly rudimentary, but apparently got where it needed to go! Safety? No, but you arrived safely.
What would you say was the demographic composition of your group? Especially age, ethnicity and where they live now.

Thank you very much Ellen. We have seen a good and interesting part of this world, but there would be so much more to explore, unfortunately time is running out! We had different groups in each of the 3 segments thus far presented, the first one in China was almost exclusively Chinese from the US and Canada, with me being the only Westerner, the tour was conducted in Chinese. In Myanmar, we had a private tour, just the two of us with driver and guides in different locations. Here in Thailand we had a larger group, mainly North-Americans with a couple of Australians, if I remember correctly. Quite wide range of ages, from a young, newly married couple out of New York to people in their seventies, I would say. A good group overall.

Thank you Jim, glad you enjoyed the images in this set.

Thanks Ken, I am happy to hear that you found this really interesting, for once a departure from golden temples and statues to how people function in this part of the world.

Reply
Page 1 of 2 next>
If you want to reply, then register here. Registration is free and your account is created instantly, so you can post right away.
Photo Gallery
Home | Latest Digest | Back to Top | All Sections
Contact us | Privacy policy | Terms of use | DMCA
UglyHedgehog.com - Forum
Copyright 2011-2022 Ugly Hedgehog, Inc.