samantha90 Loc: Fort Worth,Texas
How can an animal be so affectionate one minute and totally ignore you the next? I think they know they have the upper hand. 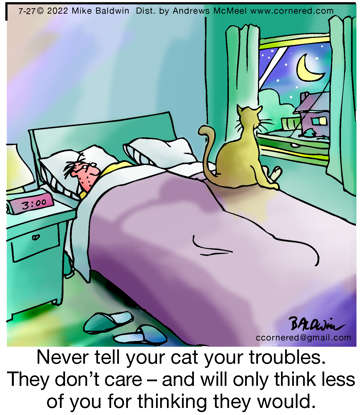 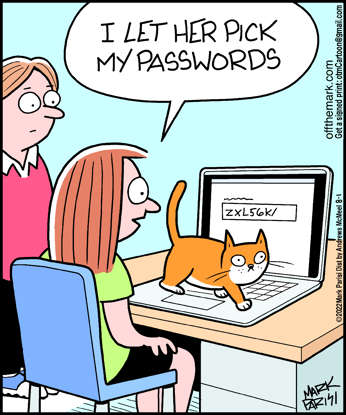 Your right! Dogs have owners and cats have servants.😃

TriX Loc: Raleigh, NC
Do not infer that I purr because you pat. You pat because I purr. I am the cat, remember that.

SteveR Loc: Dallas
Throughout my life, I've been fortunate to have some really great cats. Our #1 great cat Tigger loved the outdoors and at times would be gone for days. Most of the time I could find him lounging in the warmth of the garage attic. However, in the evening, he knew his job was to stay with my daughter Julie until she went to sleep, and he would. Oddly, he could sense when she finally went to sleep and that's when he would leave her bed. Until then he was perfectly content. It was always nice to have him jump up in your lap for some good cat-human lovin', too. Just enough to let us know that we were HIS pets just as much as he was ours. He was annoying in one regard. My wife being an R.N. nurse would have to be at work early, so he would get fed at 5 during the week. Well, guess when he wanted to get fed on the weekend? You guessed it. 5 o'clock in the morning!!!! BTW, we never saw a rat during Tigger's watch. Great hunter. Not so much with birds, though, contrary to what people will tell you. I never saw him catch one.

whatdat Loc: Del Valle, Tx.
TriX wrote:
Do not infer that I purr because you pat. You pat because I purr. I am the cat, remember that.

burkphoto Loc: High Point, NC
samantha90 wrote:
How can an animal be so affectionate one minute and totally ignore you the next? I think they know they have the upper hand.

They do have the upper hand if you let them. They will annoy the $#!† out of you if you don't let them. They are total introverts in adulthood, in the sense that they only need you to feed them, change their litter, and offer a warm lap or a scratch every now and then.

PhotogHobbyist Loc: Bradford, PA
I like the story of a Doberman Pinscher, a German Shepherd and a cat died and crossed the Rainbow Bridge. As they reached the other end, God asked each why they should be in heaven. The Shepherd and Doberman each described their loyalty and protectiveness of their masters and family and their love of the humans. As the Shepherd concluded his talk, God said, "You may sit on my right." As the Dobie ended his speech, God said, You may sit on my left." Turning to the cat he asked, "Why should you be permitted into heaven?" The cat replied, "I think you are in my seat."

Reply
Page 1 of 2 next>
If you want to reply, then register here. Registration is free and your account is created instantly, so you can post right away.
General Chit-Chat (non-photography talk)
Home | Latest Digest | Back to Top | All Sections
Contact us | Privacy policy | Terms of use | DMCA
UglyHedgehog.com - Forum
Copyright 2011-2022 Ugly Hedgehog, Inc.