jerryc41 Loc: Catskill Mts of NY
A local person posted this picture of a bear at his house last night. The bear smelled the bird feeder on his deck, and he went up and took it away. The picture below is a clip from the short, automatic video he posted. The bear stood up to get a better smell. Then he walked a few feet and went back to all-fours. 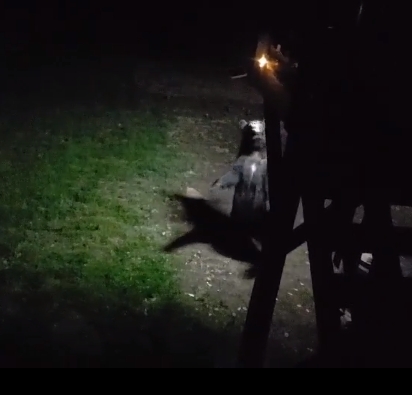 RGreenway Loc: Morristown, New Jersey
I love feeding birds, but can do it only from late November to early March because bears do attack feeders the rest of the year. I lost several over the years to bears.During the winter they hibernate so feeders is OK. This is northern NJ so based on where you are, the "safe" months to feed will be different!

sb Loc: Florida's East Coast
You pretty much have to take the feeders in at night to keep them from being taken away by bears. I have also found it hard to keep the raccoons out of the feeders at night. I had what I thought was a raccoon-proof post with the bottom three feet covered by aluminum duct which would prevent them from getting a grip. After having multiple episodes of feeders being emptied out at night I mounted a trail cam - it showed that one raccoon would boost up another one who could reach the top of the duct and then pull himself up and empty the contents of the feeder for his friends on the ground.

pdsdville Loc: Midlothian, Tx
Sitting on the deck of a friend in western North Carolina when a neighbor hollered that there was a bear in the front yard stealing his birdfeeder. We jumped up, me grabbing my camera, and ran out the front door. Didn't see the bear but saw one feeder about 30 yards up the road so away we went. Got up to the feeder and I realized, what would we do if we caught up to the bear. I stopped, my friend did not. The bear still had one feeder. I hollered at him and he realized the same thing I'd already though of and he stopped and came back. Score bear 1, us 1. Never did find the second feeder.

Doddy Loc: Barnard Castle-England
What an amazing sight, we just have the usual suspects (birds) on our feeders.