Nikonian72 Loc: Long Beach CA
In digital cameras, the camera's format refers to the size of its image sensor. Nikon makes an APS-C size sensor called DX format (quite similar in size to Cannon's APS-C sensor) and an FX format sensor. The DX format is the smaller sensor at 24x16mm; the larger FX format sensor measures 36x24mm which is approximately the same size as 35mm film.

Different Nikkor lenses are designed to accommodate the different camera sensor sizes. In the case of DX cameras with their smaller sensors, corresponding DX lenses have been designed. The DX designation can be found in the lens name, i.e. AF-S DX Zoom-Nikkor 12-24mm f/4G IF-ED. These lenses are smaller and lighter in weight and address the market's need for affordable, high-performance lenses with a variety of focal lengths and zoom options.

The DX sensor makes possible the production of lighter, smaller cameras, but because it covers a smaller portion of the image projected by the lens, a 1.5x crop factor (so called because the smaller sensor crops the image compared to an image from a 35mm film frame) is introduced. This means, for example, a 24mm lens on a DX sensor camera will provide an approximate 36mm view.

The FX sensor, with more "light gathering" area, offers higher sensitivity and, generally, lower noise. There is, of course, no crop factor present with the FX sensor (see image #1).

DX cameras have the added benefit of being able to use both DX and non-DX Nikkor lensesthose lenses without the DX designation in their names, i.e. AF-S Nikkor 14-24mm f/2.8G ED. And here's why.

On an FX-format camera with a DX lens mounted, the camera will automatically engage its built-in DX crop mode, thus recording an image only from the center section of the sensor (see image #3). The "cropped" image is also projected to the eyepiece.

Image #4 made by UHH member zundapp5, which shows the same coin photographed with same macro lens at MFD, on a Full Frame sensor camera, and an APS-C sensor camera. Note that the coin is the same size, but the Fields of View are different.
BOTH are true macro-photographs of the coin.
Image #1 - DX-FX cut away diagram 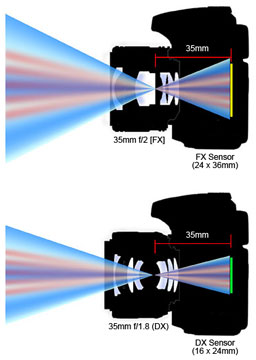 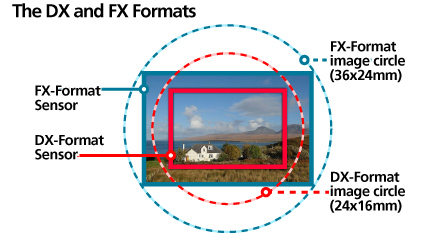 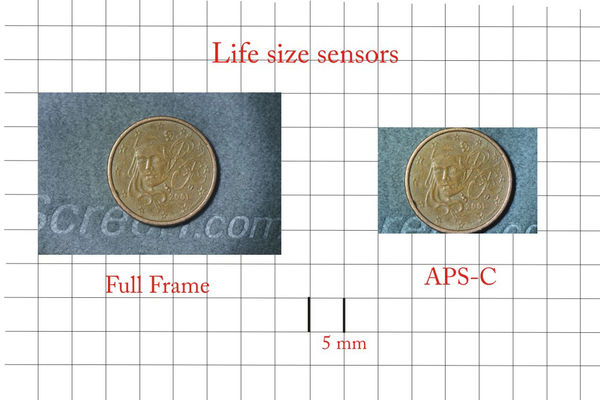 Nikonian72 Loc: Long Beach CA
The purple circle represents the light projected by any given lens (we will use a 10-mm as an example). An FX sensor (green rectangle) sees and captures the full diameter projection. With the same lens, a DX sensor (yellow rectangle) can only see & capture a smaller area. The lens never changes; it will always be a 10-mm lens, no matter the camera, nor the sensor size. For comparison purposes only, the captured DX image has the same Field-of-View (equivalent) as a 15-mm lens on an FX sensor.
Sensors - Full Frame (FX) vs APS-C (DX) Field-of-View Comparison 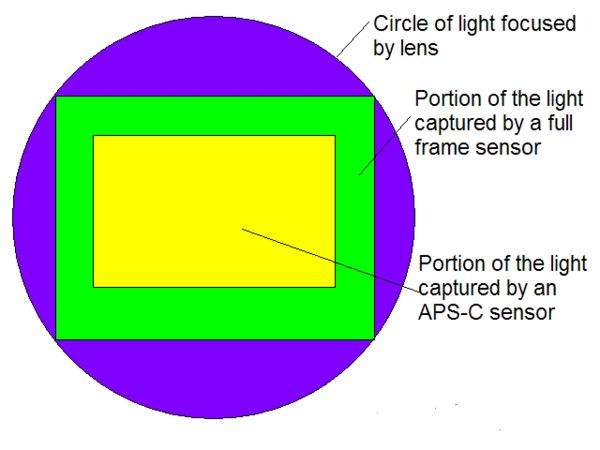 | Reply
If you want to reply, then register here. Registration is free and your account is created instantly, so you can post right away.
Frequently Asked Questions and Answers
Home | Latest Digest | Back to Top | All Sections
Contact us | Privacy policy | Terms of use | DMCA
UglyHedgehog.com - Forum
Copyright 2011-2021 Ugly Hedgehog, Inc.