sippyjug104 Loc: Missouri
This is an image of a House Fly that I captured this morning and staged for a focus stacking session. It shows the mouthparts which is used in a sponging action to slurp up its food.

This is what I found that describes what you will see in this image of the fly that I copied for those who may want to know more:

The mouthparts consists of the elbowed labium that has a fleshy look. At the end of the labium, there are large sponge like organs called labella. The hairs usually surround the mouthparts. This is to retain moisture on the fly thus keeping water loss from body at minimum level.

The labella is a very complex structure that contain many grooves known as pseudotrachea. This structure is very important as it suck up liquids like a sponge.

Saliva is also released from the labella to help dissolve and collect food particles. This will ease the food uptake by the pseudotrachea. The process of food uptake occurs through capillary actions.

Once liquid food is drawn by the pseudotrachea, it will pass through the food channel into the oesophagus.

Sponging mouthpart flies cannot bite or chew food with the exception of tsetse, horsefly and deerfly. Higher diptera such as houseflies have lost their mandibles and maxillae an organ which helps in the biting and chewing process. 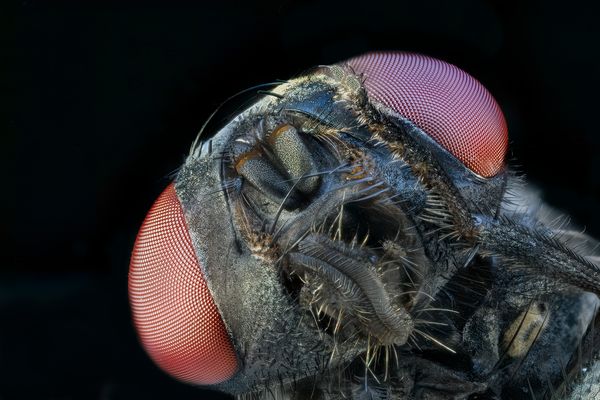 Thanks, Tinusbum. The housefly mouth is quite unique from other types of mouths and I was fortunate to get a view of one.

Thanks, Scott. An ugly sucker it is for sure.

Thanks, Kpmac. I know that it's quite gross although I thought that it was interesting.

Thanks, Napabob. Of course the common housefly is small in comparison to the other common flies. They exude enzymes in their saliva that turns whatever they eat into a liquid soup so that it can be sponged up which makes them pretty nasty.

Thanks, Doc. You know how small a housefly is so getting that little bugger into position to showcase its mouthparts took a bit of trial and error at those levels of magnification. I shared the narrative for one that I found on a university website where I read about the process and the evolution of its specialized mouth.

Thanks for dropping by and for the reply.