Ugly Hedgehog® - Photography Forum
Home | Active Topics | Newest Pictures | Search | Login | Register
Main Photography Discussion
Buying a new laptop.
Page: <<prev 1 2 3 4 5 6 7 next>>
Jan 13, 2020 10:26:32   #
CWGordon
My wife and I have decided to buy the Lenovo Legion y545. However, I did not realize that this unit does not have a SD port! That would be big for me. bsprague stated above an alternative approach. I am rather computer illiterate. I would sure be appreciative were bsprague or someone else explain the alternative approach in a bit more detail. I thank anyone in advance that might give the time to provide such guidance.

bsprague Loc: Near Tacoma, WA, USA
CWGordon wrote:
My wife and I have decided to buy the Lenovo Legion y545. However, I did not realize that this unit does not have a SD port! That would be big for me. bsprague stated above an alternative approach. I am rather computer illiterate. I would sure be appreciative were bsprague or someone else explain the alternative approach in a bit more detail. I thank anyone in advance that might give the time to provide such guidance.

"I would sure be appreciative were bsprague or someone else explain the alternative approach in a bit more detail. "

When you want to read or copy the files on your camera's SD card, you use an "SD Card Reader". They will plug into one of the three USB ports on the Y545. My last laptop (that I wore out) had a built in SD card reader. It was slower than USB 3.0 specifications so I got a card reader. I'm still using the same one on the new computer.

There is no software, power or batteries needed. You just stick the card in the reader and then stick the reader into the USB port. 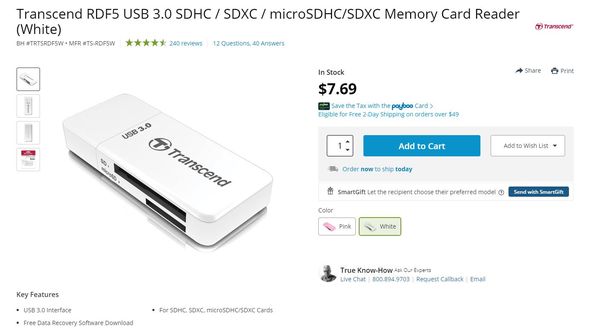 dsmeltz Loc: Philadelphia
Bob Mevis wrote:
Dell, HP, Asus or Lenovo. Get as many gigs of RAM as you can. Or a laptop that you can upgrade. My Toshiba has 8 gigs and can't be upgraded. It handles Photoshop adequately for me.

| Reply
Jan 13, 2020 10:59:00   #
glennroby
I bought the Lenovo at Costco and it has everything you need. I paid $50 more and Costco is the only place you can get that configuration and lesser equipped models cost more any place else.

| Reply
Jan 13, 2020 11:01:26   #
CWGordon
WOW! Thanks guys! I really appreciate your feedback. We did look on-line and did see prices that were two to three hundred dollars less than at the local shop. I will bargain some more, but prefer do ing business locally and with small businesses. I would hate to have to ask a local store-owner for assistance with advice or upgrades on a unit I bought on-line. Included locally is set up, installation of upgrades at minimal cost, and a full one year guarantee, as well as two sessions to either trouble shoot or teach us how to do things we know nothing about. The unit also is 15% off. I buy my bicycle, camera, and almost anything I can from local and small merchants. It does cost a bit more sometimes, but some dealers will match the big NY stores. I am amazed at how much merchants have been thankful for a purchase and what great resources, even friends some of them have become. A couple have exchanged Christmas gifts w/me. It seems important to our local and national economies that we support such businesses.
Again, thank you all who have and might still give freely their advice and expertise. Thank you, thank you, thank you.

Canisdirus
MrMophoto wrote:
More thoughts on the Mac v PC controversy; Macs will cost more (from a little extra to a lot extra), but last longer, Mac doesn't make bad products. You can get a lot more machine buying PC for the same price, but you may replace it in 5 years or so, depending on how you use it. Mac will last 8+ years, depending. My brother, who is an MIT & Microsoft graduate loves his Mac. When I needed a new computer (laptop) almost 4 years ago I was considering a Mac, my brother mentioned the cost difference as well as the operating system: if you are presently using a PC, gong to a Mac means learning a new operating system, this may not be a problem but there will be a learning curve. I opted for a Dell Inspiron 7000 with an SSD & 1TB HDD 7th Gen i7 intel. At the time it was approx. $1100 Since I do a lot of photos and even more PS work, I wanted the speed and high end graphics card. I don't keep any of my work on the hard drive but rather on an external HD. The machine is advertised as a gaming computer by Dell. Almost four years later it is still running great, one of the best computers I've ever owned.
More thoughts on the Mac v PC controversy; Macs w... (show quote)

I think macs are great.
But they are built at slave labor wages, and I can't be a part of that. Not if there are choices from countries with labor laws with the actual worker in mind.
Nets to prevent suicide doesn't count.

| Reply
Jan 13, 2020 11:37:58   #
Matches Malone
Ease of use is key. In the land of now, the recommendation to get the cheapest is best, however it may not be practical for someone that wants to use their laptop for more than six months.

There is a way to treat the presented triangle as equilateral. Speed, Price, or Storage; what's most important?

I agree that saving your money is a good idea, and the last longer bet is to go with technology that you won't have to hack in order to get what you want. The key to this entire post is that he's using Photoshop, and if that's a subscription service and he doesn't own the actual software, you have to go with the Mac.

Yes, I work both sides of the aisle.

carney2
As these posts indicate, your first decision will be Mac vs. PC. There's no middle ground, and whatever software you choose will be dedicated.. Most serious photo pros seem to have gone Mac, but I'm still using an 8 year old Toshiba that has been upgraded to Windows 10. I will carry it into the friendly skies tomorrow as I head for the southwest desert, and will again not be disappointed.

MrMophoto Loc: Rhode Island "The biggest little"
If you haven't committed yourself to a local merchant, you may want to consider this; when I bought my Dell laptop almost three years ago I also bought a warranty package, three years of all parts, labor and in home servicing for about $300 . Unfortunately, about a year and a half after purchase the SSD stopped working, I contacted Dell and they sent a (subcontractor) tech to my house and I watched as she replaced the drive for NO out of pocket expense! As I've mentioned before, I don't keep any data on the computer HD so I didn't loose anything, just had to reinstall the programs I had, PS, office suite, etc. It was well worth the extra expense and the warranty was only available through Dell directly

| Reply
Jan 13, 2020 12:08:05   #
dornie
I am in the same situation and have been entertaining different approaches especially since my photo inventory is in the five figures and will probably reach the six figures.

I presently have an iMac 27" Desktop, which makes it a little hard to go to a small screen. I did consider the 21" Desktop, but in the process of possibly relocating so that is as factor and the new 16" laptop with 64 RAMS and up to 8 TB Storage, etc. is very inviting. I have also considered a "Mini" that was recently updated and use it solely for photos just as you would on an Ext. HD. The Mini can be paired with your present key boards, monitors, etc, or whatever you choose. It is also compact and easy to carry around and use with other equipment while still containing many of the bells and whistles of ther computers. So there are choices. Of course, Apple does have provisions of running Windows on it including both Apple/Windows side by side. Being 90, I have found it a little too challenging using both, but with Parallels its possible. Personally having switched from Windows to Apple, I have found Apple easier, even though both have good own the same programs. There are choices, so it boils down to $, financing, and the value you put on your work. If there is a will, there maybe a way.

| Reply
Jan 13, 2020 12:12:45   #
CWGordon
I am once again, in awe of the knowledge and expertise available out there among our group and contributors. I hope the information provided is as helpful to other readers as it has been for me. 🙏

| Reply
Page: <<prev 1 2 3 4 5 6 7 next>>
If you want to reply, then register here. Registration is free and your account is created instantly, so you can post right away.
Main Photography Discussion
Home | Latest Digest | Back to Top | All Sections
Contact us | Privacy policy | Terms of use | DMCA
UglyHedgehog.com - Forum
Copyright 2011-2020 Ugly Hedgehog, Inc.