Jim Plogger Loc: East Tennessee
Where in the world is this? Answer later. 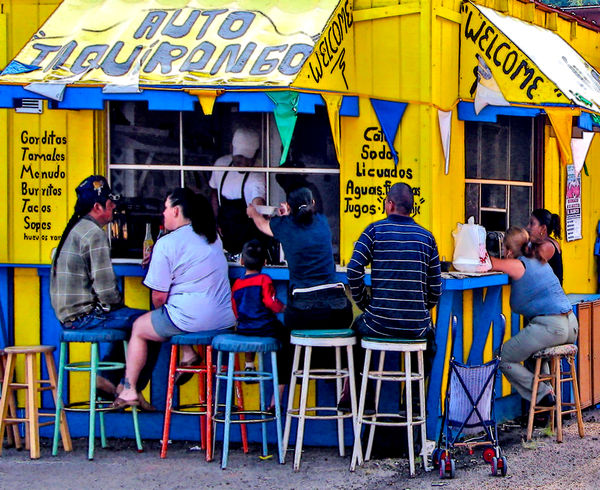 Ched49 Loc: Pittsburgh, Pa.
Is this a contest? I would say Mexico.

My WAG is Cuba.

Jim Plogger Loc: East Tennessee
Ched49 wrote:
Is this a contest? I would say Mexico.

Hola. Seeing as is says "Welcome" in English. I might guess California or New Mexico. It obviously features Mexican food. Could even be Tijuana in an American friendly area. The blurry hung poster on the side of the building says something about "Jalisco, Mexico."

Tom DePuy Loc: Waxhaw, NC...Just east of Charlotte
Jim Plogger wrote:
Where in the world is this? Answer later.

Bamboo Loc: South Carolina
Southern California between San Diego and LA would be my guess.

Bamboo Loc: South Carolina
Home base for a roach coach

BINGO! Green Acres Flea Market, Blount County, Tennessee. By the way I took this in 2004. The food was great.

In the late 40s, early 50s my parents worked for the "Brown Shoe Company" plant in Cairo Ill across the Ohio from Ballard County KY and my home town of Barlow. There was a Mexican family that had a small truck converted into a food stand who showed up at the plant everyday when they got off work with a full load of homemade tamales etc. and my folks would bring some home for dinner about once a week, I loved them but at age 4/5 didn't know Mexico even existed. I just knew they were good. Cairo also had an old 20s Ford truck that had been converted into a hamburger stand - polished hardwood, brass fittings, even stained glass windows. The owner drove the truck to where ever anything was going on - ball games etc but his regular spot was by the Woolworth's in the middle of the "down town" shopping area. In those days Cairo was still a major rail and river hub of almost 10,000 people. Today it is down to less than 3,000.

jaymatt Loc: Alexandria, Indiana
I have no idea, but it’s a nice street shot.