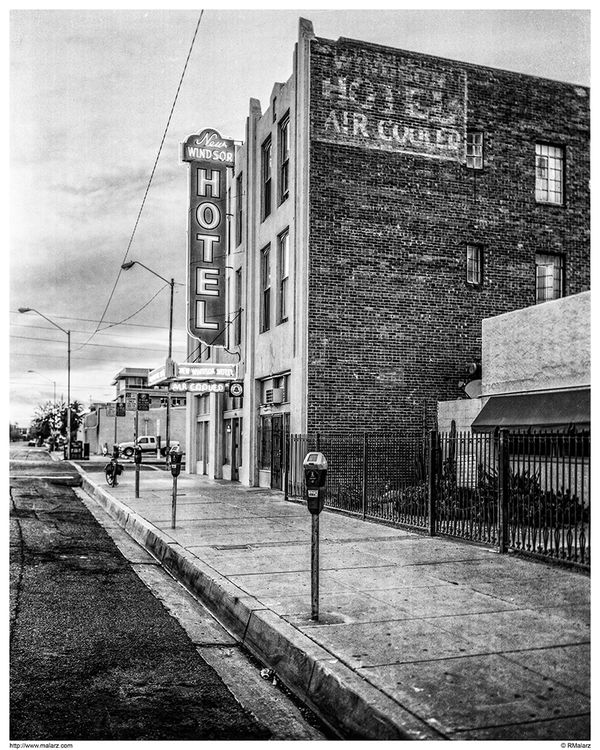 And speaking of cool, I'm familiar with air cooled motorcycle, car, and aircraft engines... but this is the first time I've seen an air cooled hotel? I'd also point out that this looks nothing like Windsor (either the old town, or the newer building since WW2), or indeed Windsor Castle (where Queenie & Phil like to hang out).

I'm sometimes given to wondering why seedy hotel owners in the US seem to be partial to naming their businesses after English Stately Homes?

David in Dallas Loc: Dallas, Texas, USA
^^^^^ It's an attempt to project some dignity and grandeur onto the place (which probably needs it).

rmalarz Loc: Tempe, Arizona
Bushpilot, BB4A, and David, Thanks for stopping by, viewing, and commenting.

Here's a bit on the hotel from Wikipedia.

In 1881, Phoenix was incorporated as a city. One of the first of several important events which revolutionized the economy of Phoenix was the establishment of a railroad system in the 1880s. Phoenix thus became the most important trade center in Arizona. In 1888, the city offices were moved into a new City Hall, at Washington Street and Central Avenue and in 1889, the territorial capital was moved from the town of Prescott to Phoenix. When the territorial capital was moved from Prescott to Phoenix in 1889 the temporary territorial offices were also located in City Hall.

The need for the establishment of hotels and living quarters was apparent. In 1893, Phoenix pioneer and businessman A.D. Walsh had a hotel built in the corner of what is now known as 6th Avenue and Adams Street and named it the 6th Avenue Hotel. The proper address of the building, which originally was a two-story brick Victorian styled structure, is 546 W. Adams Street.

In 1925, the hotel was renamed the Windsor Hotel. In the 1930s the Windsor went through a remodeling process in which a third story was added. The third story brick structure has a stucco facade on the south and west walls. A front brick addition with casement windows mixed the Victorian architecture with a modern facade. In the 1950s, it was finally renamed the "New" Windsor Hotel.

No longer used as a hotel, it is now a low cost haven for the elderly poor in downtown Phoenix.

cabunit Loc: SE Connecticut
What a great treatment. Imagining away the modern parking meters and truck, I can see this as a shot out of 80-year old archives. (In fact, for a split second....)

rmalarz Loc: Tempe, Arizona
cabunit and Bob, thanks for viewing and commenting.

It was an interesting experience photographing this building and then viewing the processing when it was completed.
--Bob

rmalarz Loc: Tempe, Arizona
Thank you very much, Bob and Jim. Your visits and comments are always appreciated.
--Bob

DOOK Loc: Maclean, Australia
I like it, Bob. Beautiful work.

rmalarz Loc: Tempe, Arizona
Thank you very much, Earl. Your comment is very much appreciated.
--Bob
DOOK wrote:
I like it, Bob. Beautiful work.

Nice one. Seems odd to build a brick building in Phoenix. Must be a complete oven inside in August.

David in Dallas Loc: Dallas, Texas, USA
rgrenaderphoto wrote:
Nice one. Seems odd to build a brick building in Phoenix. Must be a complete oven inside in August.
Nah--it's "air cooled", remember?