I am having a problem shooting night pictures. I have a Sony A230 and it is ok except at night. Last night we had a storm and lost power. There was a tree down completely blocking the street in front of my house. I wanted to take a picture to send to the local tv station. I set up my tripod and set the camera for night pictures. We had flashlights shinning on the tree for some light but the camera would not take the picture. It just made noises and would not take a picture. I finally gave up and got my Vivitar 5.0 mega pixel and took beautiful pictures of it even without the light from the flashlights. It seems to me that my old Vivatar usually takes better pictures that the new Sony. What am I doing wrong or did I just buy the wrong camera? I paid almost $900.00 for it and that was all I could afford. I think it must just be me so can you please give me some advice? Especially for night pictures.
Thank you,
Chris

DanielB Loc: San Diego, Ca
Your camera was probably trying to focus on something but couldn't lock on. Try to manually focus next time.

Reply
Aug 21, 2011 02:11:33   #
crochetgran
I have tried that too. I think it I waisted my money on a DSLR camera when a regular digal camera takes better pictures.
Thanks,
Chris

Reply
Aug 21, 2011 03:25:54   #
crochetgran
This picture was taken with my Sony at night. But there are two big street lights close and then the light of the snow. The sony takes pictures like this but if it doesn't have a lot of light it won't take the picture. 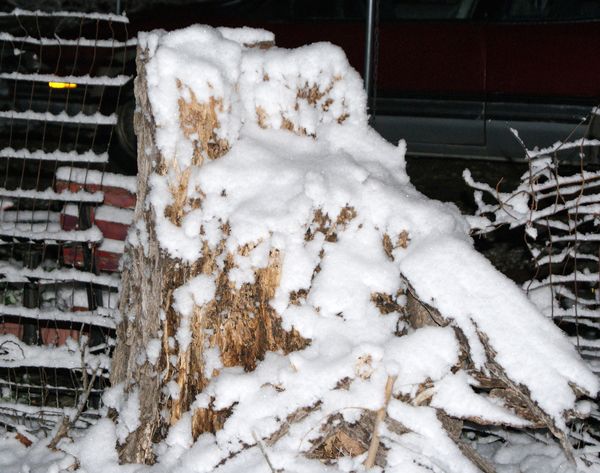 Randyb1969 Loc: Armpit of California
Shooting night shots is not easy. The camera isn't going to make as big a difference as your ability to use it. DSLRs have a learning curve that is much steeper than a point and shoot. I'm still learning a lot about mine after 2 years. It is definitely worth it once you get used to it though.

DanielB Loc: San Diego, Ca
You will never get the quality of photo from a point and shoot than you will from a DSLR. Sony is not a big player in the DSLR market like Nikon or Canon and I can't speak to the quality of Sony's cameras. You must take the time to learn the functionality of you camera or you wil never master it. That being said if your just interested in casual day to day shooting and not interested in the creativity and art of photography then you may have wasted your money.

ianhargraves1066 Loc: NEW SMYRNA BEACH, Florida
The "rumbling " in the camera was almost certainly that the automatic focus unit could not lock onto the subject. I have a Canon EOS 50D that does the same if the illumination is not bright enough. Turn off the auto focus and focus manually. Bet you a roll of 120 FP4 Film that it will cure your problem.
Good Luck
Ian Hargraves
igh1066@hotmail.com
Port Orange,
Florida

DanielB Loc: San Diego, Ca
Bump up the ISO and use a tripod and external Flash or no flash at all. Your camera will try to compensate for exposure when using a flash. The built in Flash has nowhere near the power to cast enough light much beyond 10 - 15 feet. A good external flash will have better range and will help the camera focus on distant objects with focus assist beam or flash. Don't give up - keep experimenting. It does get better. I've attached an example. I took this with a tripod at 10pm on a very dark night no flash & no moon. If you could see the original photo you can see every star in the night sky as well as the group of people standing in the field. 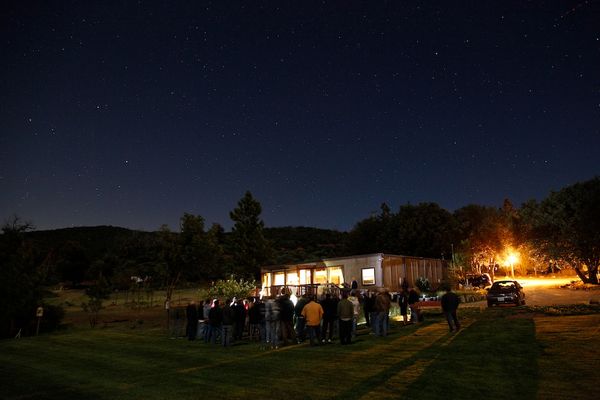 Reply
Aug 22, 2011 02:14:48   #
crochetgran
Thank you for your help. I am not giving up. The picture you put up has a lot of light in it, from the windows and from the light behind the building in what looks to be a parking lot. I have been able to take pictures with a lot of light around the subject like the stump picture. So maybe I just don't have enough light. I am not sure I can afford an external flash. I guess I don't have to take night shots most of the time I was just fascinated by some of the night shots I have seen and would like to take some.