slclog Loc: Illinois
There is a lot wrong with this shot but I am trying to understand what caused all the issues. Things I know: That really is the moon up there. Canon 20D, f10, 50mm, ISO 200, Manual focus, crooked tripod, basketball hoop still in picture white line that is an airplane going by.
In the lighter picture 25 second exposure
In the Darker picture 8 seconds with a minor re-positioning of the lens.
Aside from fixing the obvious framing issues, how would you expose a shot like this? What settings and what do you focus on. My eyes aren't the greatest, but I'm pretty sure the moon was in focus in the viewfinder 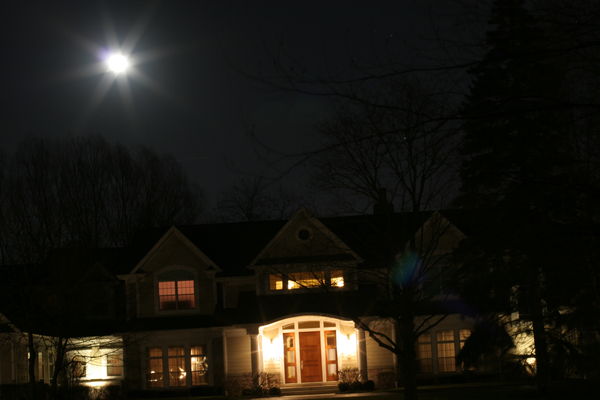 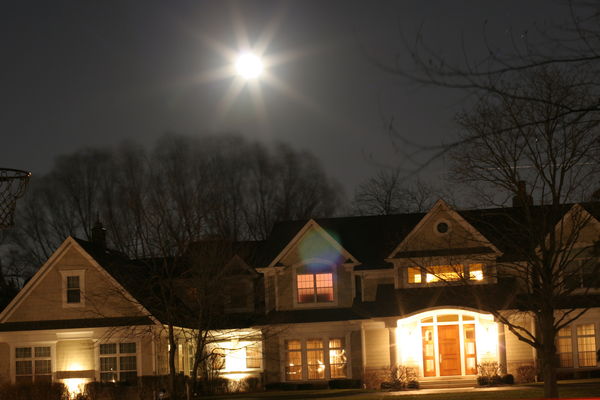 slclog Loc: Illinois
And no, that's not my house. I live in the shed across the street.

WxGuesser Loc: Portland OR
A suggestion, get a picture where the exposure is a bit between the two (or use some software to lighten up the second shot). Also take a photo where the exposure is set as if it were full daylight (it's daylight on the moon) that way your moon won't be just a white blob, you will have nice details. These photos should within a minute or so of each other. Then take some software like Photoshop Elements, Photoshop, or Corel Paint shop pro photo, and with layers take the image of the moon that's showing the details and paste it over the white blob. It will be a cool picture.

slclog Loc: Illinois
Thanks. I did try again later without the house and from reading some of the other threads here was able to get a proper exposure of just the moon. I'll try the same thing with multiple images of the house and moon.

DennisK Loc: Pickle City,Illinois
I don't know about anyone else,but except for the blown out porch lights,I really like the darker shot.

First of all, I love the "starburst" effect of the moon! Second, the photo could use a little horizontal straightening. If you want the moon and house to be sharp, use f16- f22 with MLU(mirror lock up) technique if your camera is capable of MLU. You probably have to use a 60 seconds shutter speed or more if you are shooting manual. Shoot many combination of aperture-shutter combo. Bracket, bracket, bracket!!!

especially on a large streaker :mrgreen:

Cappy Loc: Wildwood, NJ
Try shooting the moon & any house at around sunset.

photo guy Loc: Chippewa Falls, WI
I like the 1st one better. The only thing that I noticed more was the light spot on the house like a drop of moisture on the outside of the lens or something. Nice photos otherwise.

OnTheFly Loc: Tennessee
I have had that spot on some of my moon shots. I think, in my case it is the UV filter causing the light reflection.
photo guy wrote:
I like the 1st one better. The only thing that I noticed more was the light spot on the house like a drop of moisture on the outside of the lens or something. Nice photos otherwise.

Reply
Jan 10, 2012 19:37:34   #
twowindsbear
I think your 25sec exposure captured the movement of the moon, giving motion blur. The depth of field should be enough to have both the house & moon in focus.

WxGuesser Loc: Portland OR
twowindsbear wrote:
I think your 25sec exposure captured the movement of the moon, giving motion blur. The depth of field should be enough to have both the house & moon in focus.

Yeah just a tiny bit-it's hard to tell `tho, because the moon is so over-exposed.

Reply
Jan 10, 2012 21:22:15   #
Bruce H Loc: Oregon Coast
you are not going to get the moon and the house exposed correctly in the same shot at this time of night. go with one or the other or else combine more than one shot. The star burst around the moon is caused by the bright moon, your small aperture and the length of exposure time.

A good pace to start for a moon photo would be ISO=100 F/11 and 1/250th, you can adjust from there. shooting the moon while the sky still has daylight in it will help close the gap between exposure for the house and exposure for the moon.

Merlin1300 Loc: New England, But Now & Forever SoTX
Tripod and HDR. I suppose I could have reduced the moon blur by using higher ISO (see the star streaks) - - I think the longest exposure for the dark shot was about 20 seconds - - 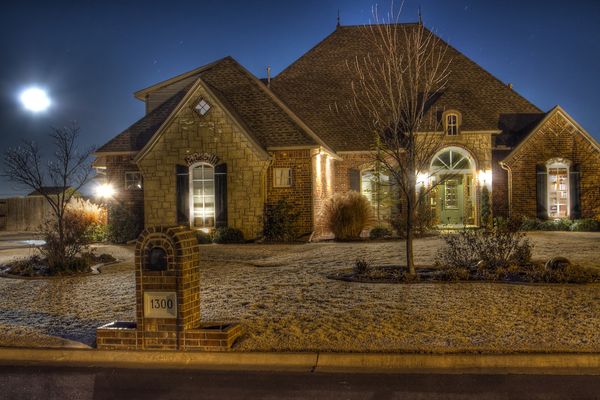 Reply
Page 1 of 2 next>
If you want to reply, then register here. Registration is free and your account is created instantly, so you can post right away.
Photo Analysis
Home | Latest Digest | Back to Top | All Sections
Contact us | Privacy policy | Terms of use | DMCA
UglyHedgehog.com - Forum
Copyright 2011-2022 Ugly Hedgehog, Inc.